Who is Baba Vanga?

Click here to read the detailed biography of Baba Vanga

(1911-1996) Vangelia Gushterova or Baba Vanga (grandmother Vanga in Bulgarian) was born on January 31, 1911 in Strumica, Yugoslavia. She is recognized worldwide for her prophecies and is renowned as a phenomenon that has the gift to foretell the future.

People called Baba Vanga the bearer of the good news. Three year old Baba Vanga loses her mother and her father went to the front during the First World War. She grew up almost alone, and when she was 7 years old her father remarried. In 1923 the family moved to Novo Selo and there Baba Vanga experienced great unhappiness in her life. One time, when she went to the “Khan” fountain together with her cousins, a dreadful storm had risen, taking Baba Vanga 2 km inside the crop fields. From the dirt and dust she felt a cutting pain and could not open her eyes. After three unsuccessful operations, she remained completely blind at the age of 12. She stayed at a home for blind people in the town of Zemun until she was 18, and later she returned to her home to look after for her brothers and sisters after the death of her stepmother.

This was the period in which unusual events began to happen. She often started to dream, hear voices, have visions, talk to the dead and plants, predict events that most came true with extreme accuracy.

Shortly before her death in the “Rupite” region near the town Petrich, Baba Vanga built the church “St. Petka”, which was donated to the Bulgarian people. Today this church and region are visited by thousands of people annually. Days before her death on November 11, 1996 at 10:00 pm in a TV interview, she said the words:  “Don’t hate each other, because you are all my children!”.

She became a focus of examinations

According to the famous Bulgarian psychiatrists Prof. Georgi Lozanov and Nicola Shipkovensky, who began an extensive research about Vanga’s foretelling abilities in the late 50s, Baba Vanga is a paragnost – prophet who can predict the future. The researchers were sending feedback cards to visitors of Baba Vanga to calculate what percentage of  her predictions come true. It turned out that  80% of the prophecies were coming true. A couple of documentary movies were created. The most recent one is called “Vanga – the visible and invisible world”. The movie shows interviews that Baba Vanga did with random people, as well as interviews with Sergey Medvedev (press secretary of Boris Yeltsin), Nevena Tosheva (producer of the first documentary film about Vanga), Sargey Mikhalkov (author of the Soviet Union anthem), Kirsan Ilyumzhinov (businessman and politician), and others. 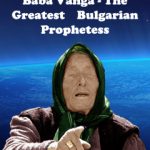 Work of the prophetess

Many esoteric books were written by close to Baba Vanga people (including staff members), that show predictions she said, or present interviews she had with different people.

Vanga said, that she is having her prophet abilities from an invisible creates, that give her information about people. She said that when somebody stands infront of her, she sees his/her life just like in a film – from birth to death.

Another research was conducted by Yuriy Negribetzkiy – academic and doctor in the field of energetic and informational science with the International Academy of Science. Dr. Negribetzkiy dedicated his scientific career in studying the power of clairvoyance. According to him, Baba Vanga’s predictions came true in 75-80% of the cases. She was explaining her gift very simply – in her mind she just asks a question and the answer comes up on its own. Dr. Negribetzkiy says that the prophetess was able to hear, see, and catch information that other people cannot. Her brain was set up in a way to search for information – in other words it was like a computer searching system.

According to Dr. Negribetzkiy, the secret of clairvoyance is the ability to be able to follow the cause and effect connection. “The world is organized in a way that there are no chances, and the future has multiple options. This is an enlightenment, intuition – something that to one extent or another is inherent to everybody”. Baba Vanga had “sonar” in her brain, and that is why she was holding a sugar cube in her hands when talking to her visitors. Dr. Negribetzkiy says that the sugar was needed because it is a crystal. “crystals strengthen the effect of clairvoyance – the information is there, you just have to extract it”.

Some of the greatest predictions of Baba Vanga include:

The beginning of the world war 2 and the consequences, the date on which Tsar Boris 3 died (Bulgarian king from 1918-1943),  the break-up of Czechoslovakia, the riots in Lebanon (1968), the war in Nicaragua (1979), the election of Indira Gandhi and her short-after death,  the break-up of the Soviet Union, the nuclear disaster in Chernobyl (Ukraine), the date when Stalin died, the USA attacks on September 11th, the disaster of the Russian “Kursk” submarine, and many others.

Baba Vanga stated that she was able to talk to people that have died hundreds of years ago. According to her, after 200 years, humans will make a contact with human like “brothers” from other worlds. In her words, there are already many aliens on Earth, that have been living here for many years. They were from a planet which they called “Vamfim” in their language.

Just before she died, Vanga said, that a girl from France, at the age of 10, will inherit her foretelling gift, and people from around the world will hear about her.

Vanga was recognized by many as a natural healer using herbal/natural medicines. According to her, people should use only herbs and spices from the country they are from. Some of her prescriptions included washing with an infusion of herbs and spices, that did produce beneficial results for many. For her, the modern medicine is not harmful, but taking pills on a regular basis is bad, as this will “close the doors” for herbs to restore the balance in the body naturally. Today there are hundreds of natural recipes recommended by Baba Vanga, that have helped and continue to help many people.

On this link you can see the most popular Bulgarian books written on Baba Vanga – http://books.balkanatolia.com Under “search” simply copy and paste “Баба Ванга” – Baba Vanga in Cyrilic alphabet.