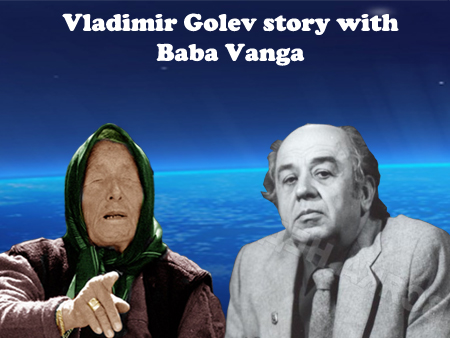 Vladimir Golev is a famous Bulgarian poet, dramatist, and novelist

I have heard many things about Baba Vanga from my colleagues – Kostadin Kulyumov and Evtim Evtimov, but unfortunately I never had the chance to meet her in person. I had some sort of fear to have a contact with the paranormal, the unexplained. Moreover, in those years Baba Vanga was rather rejected than accepted due to the social system Bulgaria was under.

In fact, in the 60-ties, for some Baba Vanga was a saint and a great phenomenon, for others she was a sinner and a crook. Those who denied her were saying that whenever someone comes to Petrich, through close to her people, Baba Vanga was gathering information, and at the same time she didn’t always have accurate readings.

The strict scientists and activists were only supporting the facts and the empirical evidences. Wasn’t this enough evidence that Baba Vanga was able to tell such great details from a person’s life, or to have a conversation with the spirits of dead people, or to tell you something that will happen in the future – sometimes many years after, or to recommend you a remedy or a doctor that will cure your disease?

All of her prophesies somehow contradicted our narrow-minded materialistic perceptions. If we accept that she was able to see our lives just like in a movie film, then we can conclude that our destinies are all predefined – whatever is written, you can’t change or delete it. This really sounds mystical – as well as her statements that there is another world, another matter besides ours that is wonderful.

So on one hand people were completely startled when Baba Vanga was able to tell them so much from their lives or the lives of their dead relatives. On the other hand there were no empirical proofs for her phenomenon, or to be more precise no one undertook the next-to-impossible task to do that.

Many of the politicians and Government leaders did officially deny Baba Vanga, but secretly they went to visit her in person, or were sending their assistance or secretaries.

I personally always believed in the paranormal abilities of Baba Vanga. I had this internal conviction that she possesses phenomenal skills to see the past and the future.

When a friend of mine, once visited Baba Vanga, she “saw” that he was wearing a new clock, and told him to repair the old one and to carry it. So she can see in the present as well – although in a different way. She used to cook, tidy her room, water the flowers, put on clothes – all by herself.

One morning Kostadin Kyulyumov entered the writer’s cafeteria and with an excitement shared with us that the local police station had lost an important key. At night few officers went to Baba Vanga to ask her where the key is. She told them: – Why do you bother me at this late hour for such a small and insignificant thing? The key is tucked in under the carpet – go and take it. To the great surprise of the whole police department, the key was indeed there.

Another colleague of mine – Ivan Arzhentinski (very sceptical of Baba Vanga’s skills), with whom I worked with in the same room told me one short story with Baba Vanga. His neighbours couldn’t find their child, and asked Ivan to ask Baba Vanga where it is. Baba Vanga had told him to ask the friend of the lost child – he knows where he is. The other boy showed the place where they last played – near by the Perlovska river, and indeed they found the dead body of the lost child who drowned in the river.

Another short story that I have with Baba Vanga is from one of my cousins. She is from Kalofer and went to see Baba Vanga because she was having a severe pneumonia and her symptoms weren’t improving for a long time. Baba Vanga welcomed her with the following words: – You will get better, don’t worry about that, but I see your mother is lying on her bed and she is sick. Take the phone and call the doctor that is looking after your mother, to go and check her immediately – if he doesn’t do that your mother will die. My cousin called the doctor right after the meeting with Baba Vanga. Eventually it turned out that her mother was having spasms on the blood vessels and if the doctor didn’t go in time, she would have died – Baba Vanga was absolutely correct.

The last story that I have is the one that affects me personally. A good friend of mine that works on the movie industry, had the chance to meet with Baba Vanga. My friend was so stunned from what she heard from Baba Vanga. At one point the prophetess called the spirits of her father who asked her different things and the said: – Why Vlado (myself) didn’t come to my funeral?

Indeed I had a bad flue at the time, and couldn’t make it to the funeral. Her father’s spirits added: – Vlado’s boy – Yasen wasn’t there as well?

My son was only 4 years old, and we didn’t want to take him to such a sad event. Right after the conversation with the father’s spirit, Baba Vanga said: – Vlado – the old house…the old house.

Why she said that, we had no clue whatsoever. Seventeen years later I realized those words. Without even recalling the story of my friend and what Baba Vanga said about me, I named my autobiographical novel – “Memories of the old house”. Even the initial name that I had  for my novel was “The Purple Flower”, because I was telling a story for my grandfather who was making wedding chests and was decorating them with a purple flower. When I took it to the publishing house, Evtim Evtimov who was the executive director at the time didn’t really like the title. Me and him started to brainstorm a new title, and I mentioned to him that there is a subtitles as well – “memories of the old house”. Evtin loved it at once, and crossed the other titles and put the new one.

Many times I asked myself whether this was a pure coincidence or indeed Baba Vanga did see and read my unwritten book, 17 years ago. Not only that it wasn’t written, but 17 years ago I didn’t even had it in my mind to write it.

Few years later, the daughter of the famous writer – Leonid Leonov, told me a story how Baba Vanga read a whole chapter in front of the writer, from his novel that he wrote years later.

Maybe Baba Vanga really had access to such information and in my case there were no coincidences!