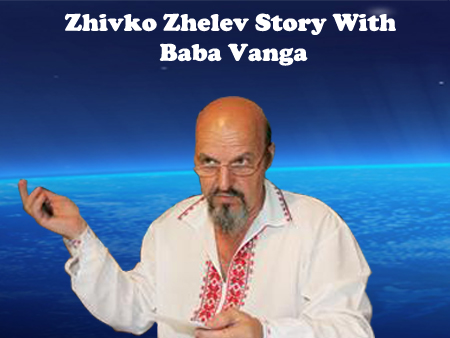 In 1990 I was laid off from DZU Stara Zagora (one of the largest contract manufacturers in Bulgaria, mainly in the field of automotive industry, plastic injection and compression moulding, electromechanical assembly and electronics, where I worked for 20 years. I was fired because I filed a lawsuit against Andrey Lukanov – former prime minister of Bulgaria.

At this time I didn’t even had a thought to go and visit Baba Vanga, because I knew very well that she was entirely dedicated to help people in need – mainly regarding health and psychological issues. My situation was to fight against the people who I knew were going to rob Bulgaria.

Back in 1990, a friend of mine from Netherlands called me. He was the specialist who was leading the Dutch team and with whom we started the project with the optical disks at DZU (back then we had serious contracts with Phillips and Sony).

He was sick. For over three years he was relying on the conventional medicine to cure his condition without success, and he eventually started to look for other alternative methods. Doctors told him that eventually his left arm and leg will get paralyzed, and they don’t have a solution for this problem.

My Dutch friend had heard about Baba Vanga, and asked me if I can arrange him a meeting with her. I promised that I will help. He came to Sofia, and we went straight to Petrich. We were accompanied by a famous Bulgarian healer – Bai Angel, who wanted to hear the feedback from Baba Vanga, as he believed that she can help my friend.

The three of us sat infront of Baba Vanga. I was going to be the interpreter, and my friend Jan was going to record the conversation with the newest recording device from Phillips. Nothing came out of this recording.

Baba Vanga turned her face towards me and asked: – Who is this man?

I said that he was my friend. Baba Vanga laughed loudly and said: – Why are you lying to me, he is not really your friend.

I was staying speechless, as not only we had to push ahead of so many people, but now I was making Baba Vanga angry.  Baba Vanga asked me what we have done together with Jan. I told her that we had launched a project at a big factory. She asked me whether the factory is in operation. I confirm. Then she said: – Don’t lie to me again, I will chase you out of here. Why are you lying to me – I see the factory is not working.

I never been so nervous and sweaty in my life. Then I realized that I am making a mistake – I don’t express myself correctly infront of Baba Vanga. Jan was rather an acquaintance of mine than a friend – I wasn’t very accurate in my communication with Baba Vanga. It was apparent that the superior powers that were guiding Baba Vanga were using a much more sophisticated and accurate language.

This first meeting with Baba Vanga was a special moment in my life. From then on, the prophetess changed my mindset completely, and I really became a different man.

She started to talk about Jan. Baba Vanga said that his spirit came from the other world. She told Jan that his father loved the sea life and it saved his life when in Gibraltar all boats have sank which was not his fault. Jan’s father was an yacht instructor, and once in Gibraltar there was a very strong storm where all passengers die, except Jan’s father.

Jan was listening carefully with a great amazement and a little bit of shock. Then Baba Vanga told him about the magnificent tulips that his country has. Our meeting continued for a long time, and for a moment I thought that Baba Vanga forgot that we came to ask her for medical advice and help for Jan.

Just before we head out home, Baba Vanga asked Jan how many surgeries he had undergo.

He said that he had three so far. Then Baba Vanga said: – I will cure your disease, and she pointed to Bai Angel. Both I and Bai Angel will treat you. Send me honey and lemons, and I will cast a spell on them, then you will eat them and you will recover – don’t be scared.

Baba Vanga and Bai Angel started their treatment on Jan, and we had to visit Baba Vanga for a couple of times. Beside honey and lemon, Jan also sent tulip bulbs as Baba Vanga had asked him, and I was simply bringing the ingredients to her house.

With the lemons and the honey on which Baba Vanga had casted a spell, and with the herbs that Bai Angel prescribed to Jan, he fully healed. Two years later he came to Petrich again to express his deep gratitude. Then Baba Vanga told him that if he doesn’t marry the woman that he has been living with for the last 4 years, he will get sick again.

I had other meetings with Baba Vanga years later. The most interesting one was the one before the last one in 1995. I went to ask her what will be the future of the biggest educational program in Bulgaria for which program I was the team leader. I carried the program on a multimedia disk in one of my pockets. This program was the reason for my conflict with Andrey Lukanov and Robert Maxwell. It was started in 1986 and its main goal was to preserve the Bulgarian culture and its folklore through a multimedia education – with this super modern project, we would have been first in the world to accomplish such a task with such a modern technology. Unfortunately when the new Democratic regime came to Bulgaria, all money that was granted for the project got stolen, and the project was stopped. This is why I filed a lawsuit against the prime minister present at the time – Andrey Lukanov.

So I went to ask Baba Vanga whether I will solve this problem. At first she just said: – Give this thing to me. I had no idea what she wanted. Then she persisted: – This thing that is in the pocket of your jacket. I realized that she meant the disk, so I gave it to her. She opened it, and she turned her hands in the air a couple of times. In this moment I felt like I lost conscious. I don’t even remember, when did I kneel infront of Baba Vanga to kiss her hand. One young man that was assisting Baba Vanga and was present during our meeting told me that Baba Vanga and I stayed motionless for about 7 minutes.

At this moment I actually had a vision, which I recalled on my way back to Sofia. It was November, it was snowing, and while driving back home, I was recalling everything that I saw in those 7 minutes while watching the snowflakes fall. I am assuming that the superior powers that guide Baba Vanga, had a direct contact with me. I saw an entirely new mechanism for recording of my optical disk, that essentially is in the form of two spirals. Apparently this information was fairly complicated for Baba Vanga to explain, so that’s why those powers sent it to me directly.

My last meeting with Baba Vanga was in 1996. She started by saying: – Last night Andrey Lukanov gave me a call. Who he think he is to call me like that. He is nobody now, he is nobody…

She repeated this for three times and then went on: – Stop dealing with Lukanov and continue on with your work. Apparently Baba Vanga simply knew that Andrey Lukanov will be later killed, so that’s why she encouraged me to carry on with my work.

After all meetings with Baba Vanga, I changed dramatically. I became less aggressive. I realized that man is both insignificant and great at the same time. I started to read about Peter Danov – one of the greatest spiritual leaders not only of Bulgaria, but of the world as well. If I hadn’t met Baba Vanga, I wouldn’t have probably finish the projects that I had started. I was developing technology to fight crime, and back then the whole country was an obstacle. Eventually I managed to introduce my technologies which are now patented, and started to sell them home and abroad.

For me Baba Vanga was a true Saint for the Bulgarian people. In the years of spiritual crises and denial, Baba Vanga came to give us this superior knowledge: knowledge from our ancestors that are taking care for preserving our sacred Bulgaria.

Baba Vanga did prove to all Bulgarians that life beyond this world exists, that there is reincarnation, and the existence of the good and bad energy. Baba Vanga had the gift to speak with the spirits of the Saints. She was a great believer, yet not canonical. Part of her mission was to prepare Bulgarians for the next phase of their spiritual development, which phase started with the beginning of the Green Aquarius era.