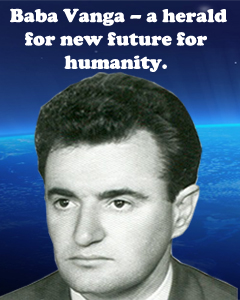 She has access to the physical and spiritual world of the individual and she can determine his moral values and health condition. She receives information for global events from the past and the future.

She can get into contact with people who passed away from the life we know. Baba Vanga claims reincarnation exists.  She can observe the movement of Alien civilizations around the Earth and can communicate with forms of life such as plants and animals.

Baba Vanga receives information in various, most often completely unknown to the science ways that suggest the presence of endless and rich informational cosmic field. From her abilities we can conclude that every individual, contains metaphysical energy with its own structure and specific spiritual ingredients. In general Baba Vanga’s abilities suggest  new capacities for the human beings, new forms of the material world, new functions and results of the evolution, that still remain unseen from the mankind.

There are universal forces of nature that affect the society. They appear as natural and historical determination of development. Failure to respect those forces is the reason for the current world’s social crisis. Those are unknown secretive and even shocking capacities of the material world that slowly are getting recognized by the science in the division of cosmic theory. The debate regarding Baba Vanga’s uncommon abilities lead to the logical conclusion that science need to adjust and to increase its flexibility. There are archaic methods and claims, which need to be abandoned.  Example would be the absolute stance of the empiric evidence that comes from experiments, while undermining the importance of hypothesis.

From Baba Vanga’s abilities could be built a new model for society, for the goals and meanings in life and for the place of mankind within the universe. Those abilities open windows for new knowledge on problems that science failed to produce explanation upon. Baba Vanga constantly underlined the moral as basis for society. There is no democracy, no human rights, without the superiority of the moral values. Wealth is ghostly and hypocritical without moral. Bulgarian nation suffers as the moral qualities suffer decline.  Selfishness, lie and commercialism are killing the world. Baba Vanga distinguished people not based on their political beliefs, but rather on their moral qualities and their behaviour in society. Baba Vanga is mainly an earthly person and not a mystical persona. From her abilities, conclusions have been made towards richer scientific picture of our word.  Genetics in its current standing cannot discover the secrets of life that extend beyond the human genome. By far we lack knowledge of those informational energy currents that reach Earth. The alien civilizations are not just similar to Earth cosmic objects. Above us there are layers of cosmic planes.

There is no dead matter, it lives and breathes in its simplest creations. In order to understand it better, we need not only new approaches in science, but also change towards better and smarter living conditions for all people. Only then humans will be able to reach deeper into the secrets of life and cherish the endless treasure of the universe.

The people, the hundreds of thousands of visitors canonize Baba Vanga as a holly person, great Bulgarian and a herald for a new future of mankind. Her modesty was one of her strongest messages towards people,  that will keep a dear memory of her that is already a legend. Legend that will become alive when the scientific discoveries of tomorrow will establish Baba Vanga as one of the miracles of society and nature.