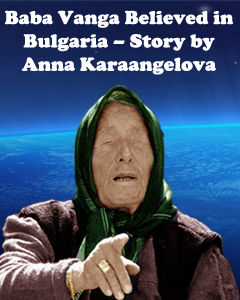 I grew up pretty close to Baba Vanga, as I am from Petrich and I knew her since I was a little girl. Later I moved to the nearby city of Sandanski, and most of the news about Baba Vanga was brought to me by a a friend and neighbour of mine –  Ivanka, a retired school teacher. She was a very close friend of Baba Vanga – almost every day she went to visit her, she was cooking for her, and helping her cleaning the house. The poor woman (Ivanka), she was barely walking as she had diabetes and her legs were sore, but she couldn’t live without Baba Vanga. When she was coming back from her visits with Baba Vanga, she was often calling me to tell me what they have talked about.

My first memories of this great prophetess date back to my childhood years. I remember watching Baba Vanga knit for hours. Baba Vanga was very close with Ivanka, as they both moved from Strumitza (present Macedonia) and knew each other from before. That being said, Ivanka used to take me with her when she was visiting Baba Vanga. I couldn’t believe my eyes how this blind woman could knit so fast and so well – even faster than most women around her. Sometimes I would go near her and stare at her eyes to see if she notices me. I even suspected at one point that she does see well. One time I remember how Baba Vanga told the women that were sweeping her yard, that they have forgotten one leave unswept.

One time, we had a visitor in Petrich – Tamara Dzhedzheva. She was the sister of the wife of the famous Bulgarian poet – Nedyalko Jordanov. Tamara was a classmate of my aunt, with whom I lived together under one roof. She came to Petrich, as she had been ordered to write an article about Baba Vanga, in which article she was supposed to criticize her activities. Tamara asked my aunt for a favor to arrange a meeting for her with the prophetess. The meeting  was arranged and when Tamara entered Baba Vanga’s house she said: “ Why are you taking this woman to me. You know that she didn’t come here for good.” After all Baba Vanga had accepted Tamara. When she came back to our house, she remained silent for about two hours. Baba Vanga with extreme accuracy had told her many things about her personal life – even the worse that she will die young. Nevertheless Tamara did write her material and published it, and during her next meeting with my aunt, she told us that everything that Baba Vanga told her did come true. Unfortunately the worst of the worst came true as well – indeed Tamara did pass away at a very young age.

Over the years I also took people to visit Baba Vanga, but I never asked her about myself. One night I took a good friend of mine to the prophetess as doctors had found a tumor in her brain and she was very worried. Right from the door Baba Vanga said: “What bothers you dear? You need a man badly, not a doctor. You don’t have any cancer. Don’t worry, it is not cancer. Doctors didn’t give you the right diagnose this time. Don’t give up on your science studies – you will succeed!”

Eventually it turned out that my friend’s husband was homosexual. They just had a divorce and she was still living the drama. It happened exactly as Baba Vanga said – my friend married for the second time, and she became a Phd in Law.

There are many stories with Baba Vanga of which I was either a witness or I was told by other people. But among all those stories, what I will remember always is her indefinite love and hope for Bulgaria. She believed that we will eventually overcome the political and economic crisis, and she was seeing the path of our salvation. I have heard her saying: “One day earth will open, and the world will discover the truth about Bulgarians. It is not true that Bulgarians are nomads. Wherever they were, a country and “white” cities they have left behind.”

Baba Vanga believed in the bright future of Bulgaria, because she knew well our past and history. It is true that our cities looked white, because the houses in the past were built from white stones. It is not coincidental that St. Petka Church that was founded by Baba Vanga in the Rupite region is entirely white. She was telling stories how strong and handsome our ancestors were, how the horse was their best friend, and they had very well organized Government system. Children were military educated by the age of 12. After this age, they have prepared girls to learn how to become mothers, and boys how to become strong and brave soldiers. Baba Vanga used to say: “The Bulgarian writing is among the oldest on Earth. One day the world will found out about that.” Maybe Baba Vanga meant the Runic alphabet of the Thracians, that are believed to be our ancestors, who lived on the Balkans. She didn’t speak about Slavs, but for Bulgarians and Thracians.

Baba Vanga was a great patriot and she loved to talk about Bulgaria – especially for our national customs. She used to say: “Bulgarians are both spiritually and physically very strong – just hear what they sing in their songs, and you will find out how they lived. You have to greatly respect your customs – they are a tool for survival.”

With her natural wisdom she was bringing awareness among Bulgarians for our customs as according to her they have secret formulas for survival – customs such as the Bulgarian horo (folkdance where everybody hold each other for the hand and dance), the folklore costumes, the unique embroidery of those costumes, the national flag and so on.

I also remember that after the structural changes in Bulgaria on November 10th, 1989 Baba Vanga was against our alienation with Russia (she never called it the Soviet Union). For her, breaking up the  friendship between Russia and Bulgaria, and the trade agreements lead to those critical years during the transition when Zhan Videnov was the prime minister of Bulgaria.

She was very sad, when she was seeing how thousands of land hectares were becoming desolated, and not cultivated. “Bulgaria who was teaching the world on agriculture, now does not have agriculture – shame on you!?”

In regards to Macedonians, Baba Vanga was categorical – “Macedonians are Bulgarians.” For the Greeks she had a bad opinion. She was saying that they have harmed Bulgaria a lot – even more than the Turkish, because they have rearranged the whole history in their favour with all of the lies they had actively propagating.

“Bulgarians are one of the spirituals leaders of the world because they have preserved qualities that no other nation around the world have. Bulgarians are strong, and they can survive under all circumstances they have been exposed to.”

I was a member of the “Baba Vanga” foundation when it was established. At the time I was a city prosecutor, and after that I became a senior jurisconsult, of the regional police in Blagoevgrad. When the St. Petka Church was under construction, I was advising people to write down everything they hear from Baba Vanga, as I had the feeling that she was towards the end of her life. Unfortunately this idea wasn’t realized. Once I asked Dimitar Valchev whom Baba Vanga raised as her own child, why they didn’t place at least two people inside her house to write down everything she says to her visitors. He told me that the legend of Baba Vanga is most important.

I think even today Bulgaria has not paid enough tributes to this great woman. She had an enormous influence over what was happening in our country for the last 50 years. Nobody could match what she has done while alive, neither there is a person today that can be of her match.

Many people today say that they have had contacts with Baba Vanga from the other world.  Once I went to St. Petka Church to light a candle. I saw a young woman that was sweeping the yard, was watering the flowers, and was cleaning. Katya – the woman that was selling candles at the church, pulled me aside and with a whispering voice told me: “this woman came here three months ago to pray for her child, as doctors had told her that he will die soon. She stayed at the church for overnight, and Baba Vanga came into her dream. She told her that doctors have given the wrong diagnoses, and instructed the woman what exactly to do to cure her child. The woman followed every step of Baba Vanga’s remedy, and she saved her son.”

Ivanka also had contacts with Baba Vanga. When the prophetess died, Ivanka went into a deep depression because of her death. Because she had an advanced diabetes and with combination of depression, her leg had swollen badly. Later it started to develop gangrene, and doctors wanted to amputate her leg otherwise she would have died. The night before the surgery Ivanka didn’t stop to pray for Baba Vanga to help her. Baba Vanga appeared and told her: “Pull yourself together, it is not your time now. God does not want to welcome you yet. You medicine for your leg is very simple. Go to the pharmacy and take 2 liters of rivanolum. Soak one sheet in the two liters of rivanolum and wrap it around your leg. Keep it on until it dries out. Then repeat again.”

Ivanka followed strictly the remedy, and indeed she saved her leg from amputating – it fully recovered!

I am truly convinced that the spirit of Baba Vanga is hovering above the Rupite region, and around all those people that remember her with great respect and gratitude. She was carrying a very heavy cross – from the most heavy ones. I admire her strength and patience how she was able to carry this burden throughout her entire life.