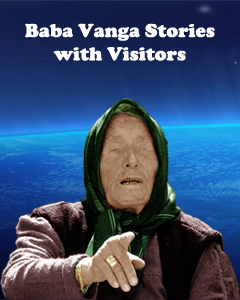 Story by Todorka Tacheva from Petrich 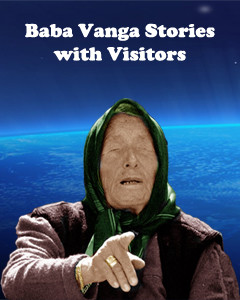 It was 1947. When I finished the high school in Petrich, I went to Dupnitza to study Pedagogy at the local university. I become a good friend with one of my class mates – Tzetza, so her mother asked me to bring few sugar cubes to Baba Vanga when I go back to Petrich to visit my relatives. I couldn’t refuse, even though I knew that it wasn’t easy to book an appointment with the prophetess. I was wondering who should I ask for a favor to arrange me a meeting with her, because If you didn’t have something serious – such as disease, divorce, recently died relative, etc., you couldn’t just go in and see Baba Vanga. I was 18 at the time and I had no problems. I was going to embarrassed if I had to refuse to Tzetza’s mother, at the same time it would have been very dishonest if I lied that I have met Baba Vanga.

Eventually a friend of my mother’s took us to see Baba Vanga. Back at those days she was living in a small and poor-looking house near the central market. After a while, she built a new house at the same place.

We entered and saw Baba Vanga in black clothing and black kerchief – she had come from Strumitza recently. She was living a poor and modest life together with her sister – Lyuba, a very nice woman.

In the room she had one icon-lamp, and over it was placed the icon of Virgin Marry. Baba Vanga took the sugar cube and held them for a couple of seconds. She told me that she will not say anything about my friend Tzetza, as I had kept the sugar in my cupboard, and I should have kept it under a stone in my yard. But she started to prophesy things about me.

The first thing she asked me was: – Who will travel over the water? I see so much water – seas and oceans.

I had no idea what she is talking about – at this time I didn’t even had the chance to see our Black Sea, or Danube river. Baba Vanga said that she can define after what time this will happen, but she mentioned the number “6”. What she said happened years later. When I was 42 – married, my husband went to work in Morocco and Casablanca – then I remembered the prophesy of Baba Vanga about the seas and oceans.  In terms of the number “6” – indeed I flew over the Mediterranean sea and the Atlantic ocean exactly six times! I remembered all of her words.

She told me also: – You are washing your hair with something very aromatic. Please bring me some of that.

I was washing my hair with shampoo – back in the 40-ties, there were no shampoos in Petrich, and I had bought a few from Sofia.

The most exciting prophesy was when she said: – You will marry a man with a great sense of humour, and his epaulets are on his lapels.

I felt embarrassed, as I wasn’t even dating guys at this time. Indeed when I was 24 I got married – my husband was a labour officer, very comical, and yes his epaulets were on his lapels!

Then he finished his higher education majoring in foreign trade, and eventually he found a Government job and was sent to Morocco. He was very intelligent – he as studying French on his own.

Baba Vanga said: – You husband will prosper! It was true, he was essentially a diplomat. At the same time he came from a very poor family from one of the villages near Petrich. He grew up with his 6 other siblings in a family with uneducated parents, but since he was little he was very studious. He is deceased now, God rests his soul.

The other thing that Baba Vanga told me was: – Now I am looking at your house and I see your mother is sewing with a sewing machine. My mother was a seamstress. Baba Vanga also saw that we have a lot of geraniums on our balcony, and asked me to bring her few, so she can grow them as well. Then she started to talk about my deceased relatives calling their names. I didn’t know a lot of them, so when I got back home I asked my mother to double check. It turned out that whatever Baba Vanga said was true.

In 1985 I visited her again. My son got married and overall his marriage didn’t go well. Baba Vanga said that he is a good man, and he will grow in his career – just like his father he graduated a high school majoring in foreign trade, and later he found a good job. I asked her if he will have children. She said that he’ll have only one child.

He married for second time, and now his wife is pregnant. Baba Vanga was right again!