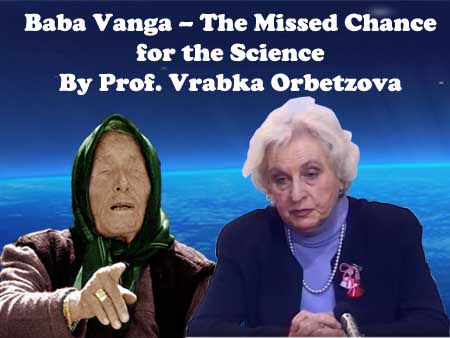 Prof. Vrabka Orbetzova is a biochemist, former deputy of the Bulgarian National Assembly, Chairman of the Union of Psychics in Bulgaria

An attempt of explaining the phenomenon of Baba Vanga

I feel that my account has become more personal than scientific. But it could not be otherwise.  I am very sorry for all the time we have missed – both I and Bulgarian science as a whole. That Baba Vanga is a phenomenon, there is no doubt. A true miracle in the life of Bulgarian society. She is and will remain an unsolved puzzle for medicine, philosophy, religion and sociology.

“The vision” of the blind Baba Vanga is a big challenge to science, especially having in mind that she could see things that ordinary people with normal sight could not. A serious scientific approach to her gift could have given us the chance to find out the truth and cast light on countless blind spots in the theory of cognition. Unfortunately, this chance was lightly missed.

As early as in ancient times, different teachings have tried to discover the key to the inner vision of prophets. Nowadays, we are rediscovering authors and literature studying the mechanism of this inner gift of man to see beyond the visible and the understandable, to go beyond the barrier of time using the power of thought and the hidden senses. Both ancient occult literature and most recent research admit that it is possible for information to be acquired not only through the 5 senses, but also by means of other, alternative receptors.

It is not accidental that people often refer to “the 6th sense”.  It is considered that one such entry point for information is the top of the crown of the head – the so called “”Qiang-din” or T 20 point, located in the middle of the fontanelle.  It was also called the seventh chakra. The informational energy flowing through it (both wave and corpuscular)is probably that direct informational channel, providing a connection between man and his or her bioenergy with the overall, cosmic informational and power system. That is why researchers of the psyche used to call it “an entry point for cosmic energy” , depicted in ancient Eastern literature as a thousand-petaled lotus flower.

It has often been discussed, that Baba Vanga’s fontanelle had never closed, which, some claimed, explained her almost permanent and inexhaustible ability to establish contact and to prophesy. Passing through this spot, not just like a beam, but like a shaft of light, the energy sets into a state of agitation the sensitive structures located on its way – the fissure of Rolando, the thalamus, the hippocampus.

Researchers of the psyche consider the right brain hemisphere to be the dominant one in the realization of extra-sensory capabilities, during whose manifestation the left hemisphere is usually suppressed – i.e. motion and verbal capabilities are blocked. The prophet is in a kind of trance, with closed eyelids or eyes looking through into the empty space and with unclear, unintelligible speech. The visions seen are usually described as sights in a kaleidoscope or on a screen.

As I have already mentioned, at certain moments – especially when Baba Vanga was receiving most of her visions – her speech became really hectic, partial, and even unintelligible. Let me remind you that she had several times pointed to the right side of her head claiming that therein lay her psychic ability.

In-depth study of the human brain has shown that it has a very complex structure, its activities being even more complex and not fully explained. Most of the structural parts of the brain’s anatomy come in pairs, i.e. they are doubled, and only some are singular. The latter usually have a connecting, synchronizing and organizing role between the two hemispheres. Of particular importance among them is the hippocampus – the synchronizer of sensory signals to and from the cerebral cortex. It is supposed that there are silicon microcrystals in the basal cells of the hippocampus, called by some pyramidal. These microcrystals are supposed to play the role of amplifiers and resonators of the informational energy flowing though the T20 point.

The internal energy wave generated by the microcrystals brought into a state of agitation is very intense and if it is not successfully channeled out of the cranial box, it could not only disrupt normal brain functions, but also cause serious structural damage and wearing out of important brain centers to the point of destruction.

Probably this is what happens with the most serious mental illnesses. The way through which the energy wave passes in order to go outside the scull (supposedly, through the so called “third eye”, or the Manas chakra) at the spot between the eyebrows, goes above the optic tracts and the optic chiasma (the place where the optic nerves partially cross).  This explains the ability to evoke optical sensations in a backwards way – from the brain to the eyes.  This is the place where both psychic visions and optical hallucinations are supposedly formed.

Recording the signal brought out by the energy wave onto the “magnetic tape” of memory, happens when a reciprocal reflective wave is generated in the same plane but in an opposite direction – towards the occipital lobe of the brain and the pineal gland (the epiphysis), considered as very important in relation to memory.  Therefore, the informational energy flow is primarily directed towards the “third eye”, thus safeguarding the brain against excessive overload, but a small portion leaves an informational imprint on the epiphysis, allowing for subsequent reproduction of the information received in the past.

Researchers of the psyche think that due to this particular spatial positioning in a singular plane of the epiphysis and “the third eye” the imprinted information accumulated during the day as a result of human activity and interaction with the surrounding environment, could, during sleep and meditation, be projected back into space. This is how the alternative, bi-directional, extra-sensory connection between Man and the Cosmos is realized. This direct connection could logically explain a lot of phenomena in the extrasensory activity of man –fortune-telling, the ability to prophesy, the sudden strokes of genius (that often happen during sleep),  as well as the accumulation of individual information, i.e. related to the specific individual, in the cosmic informational pool.

As I have already pointed out, according to psyche researchers, the passing of the energy-informational wave from the hippocampus to “the third eye” turns on and off the optical analyzing apparatus (see Spas Mavrov, “The third eye”) when going over the cross of the optical nerves.  During this process the eyes involuntarily direct the visual image generated from the brain into the outer space.

Not only I, but others as well, have observed that with Baba Vanga there is motion of the orbital muscles, although she has almost complete abulbia (lack of eyeballs).  I remember how startled I was when I saw the closing of her eye slits (I hadn’t noticed their opening).

Man is a genius creation of Nature, but the secrets of his creation and his interaction with the Universe have never been fully deciphered. Obviously, receiving information about the human essence, especially the part of it related to man’s future, is reserved for certain individuals only, and through particular rules and means. It is not accidental that, in the legends of many nations, prophets and fortune-tellers write symbols, draw unearthly scenes, go into a state of automated writing and so on.

With Baba Vanga, the visionary insight had a truly unique character and exceptional scope. If we could only imagine how many people,how many destinies have passed through her. Where from and how was she able to receive this huge, crushingly huge amount of information? From people themselves, resonating with the energy wave emanated from their brain and their mental activity? Probably so. Such an exchange of energy and information is entirely possible and proven in many aspects.

What about the prophecies, predicting not only the future of individual persons, but also events of global significance?! Due to her disability she was not able to read. I am not certain how much she could use the Braille system. At the time when she predicted the outcome of World War II, even if she had listened to the radio, she could not have easily formed her own prognosis based on that. Information must have come from somewhere else.  But where from?

The logic leads us to the assumption of the existence of an informational pool, storing data about the separate individual, his or her living program and destiny, as well as about different countries, nations and mankind as a whole. The system for receiving and transmitting information through a cosmic relation was exceptionally developed with Baba Vanga. It is a pity that cooperation from leading international institutions for research of the brain was never sought in order to study, as far as modern science allowed it, that system! I could only imagine the discoveries related the neuro-psychic abilities of man such a study could bring about…

And what about Baba Vanga’s communication with the invisible world? This side of her phenomenal gift has dismayed even those people most sceptical about her abilities, although many of them would not admit it. Does this invisible world really exist? Not long ago, I met a Bulgarian lady, a Professor in Physics at the University of Columbia. She was positive that parallel worlds do exist, and explained about some extremely interesting research on elementary particles as bearers of cosmic information, facilitating the informational and energy exchange between the different planes of space.

Just imagine how many scientific questions the phenomenon of Baba Vanga has raised. And how many answers are gone, together with the prophetess…

This is a fact we should never neglect or forget. The truth is, Baba Vanga was sent off with respect, as a great Bulgarian should be, because she used her gift, bestowed by God, only to serve people and do good, taking upon herself the burden of so much pain and suffering.  But if we continue to ignore the questions that both Baba Vanga, and others similar to her, have posed to science and society, this would be unforgivable.

Baba Vanga was a true phenomenon, and phenomena are brought to this world, to keep the human mind, thought and consciousness alert.