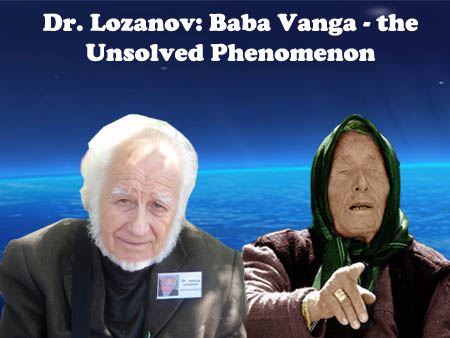 D-r Georgi Lozanov, why were you arrested at the airport in 1980?

Even today, I have no idea. I was not given any explanation. Back at the time, friends notified me, that there was lawsuit against me, filed with the High Court – you know the types of verdicts that were given there – the toughest. But this lawsuit was never carried out. Someone, somewhere stopped it.

We have heard rumors, that at the airport, they searched you for documents about Baba Vanga, whom you had been studying as a phenomenon for many years.

They found nothing of the sort! After my luggage was confiscated, they kept it for 20 days. Then, returned it back with a protocol, that it contained movies with classical music, and other materials that “could be carried abroad”. I have preserved this document. They were most probably looking for the documentary about Vanga, that we filmed together with Nikola Toshev, and were thinking that it contained information of political nature. If they had found such a movie, they could have charged me with espionage. But they found nothing.

You studied Baba Vanga for almost 10 years. How did that experiment start?

I visited her in 1962, at a time that was crucial for her. Right then, they were preparing her for internment. The authorities were alerted, because there were many reports against her. I went to Petrich with a friend of mine and his wife. Vanga guessed everything correctly – my name, profession, where I came from. She said: “Georghi, you are a doctor and you heal people with words. I agree for you to study me”. I decided to stand up for her, because she was a real phenomenon, that had to be studied. Everyone back then knew that thanks to my influence, Vanga was left to be and continued to do her work. Ludmila Zhivkova took interest in Vanga later on.

How did you manage to stand up for Baba Vanga, when the communist ideology denied such phenomena?

I had authority as a scientist, even in front of the Central Committee of the Bulgarian Communist Party. They allowed me to found the Institute of Suggestology. I however, insisted that the Institute should also have a laboratory for parapsychology, so that I could study Vanga, and other phenomena like her. Thank God, they allowed that.

So, you appointed Baba Vanga as a collaborator?

No, the truth is that I appointed Vanga’s sister, Lyubka, as a technical assistant to Vanga, so that she could always have a person by her side, who could help her. Then I used my influence to get Vanga a remuneration, as a collaborator – she didn’t have the necessary education, and could not be appointed as a scientific worker? On her door, I put a plate “Subject of Scientific Research” – and I still keep it. Vanga was relieved and told me “Thank you, doctor! Now there is no need for me to take money from people!” The municipality in Petrich appointed two policemen at her house, to keep the order. They made appointments for the people who sought Vanga’s help and took fees – 10 leva for Bulgarians and 20 leva for foreigners. The money was transferred into the bank account of the Petrich municipality. You can’t imagine the amount of money that flowed in there, from Vanga. There were thousands of people waiting to visit her. I started handing them out questionnaires, necessary for my research. They filled in their name, address, telephone and the question or problem that had brought them to Vanga. After some time, I sent them another questionnaire, where they had to answer if Vanga’s prophecy for them was indeed fulfilled.

And what conclusion did you reach about the phenomenon that she was?

She would guess a firm 60-70 percent. Every third person she would tell extraordinary things! She was at her best in the morning. When she got tired, she made mistakes, but she didn’t want to send back people. For seven years, I collected hundreds of questionnaires. Some of them I managed to process statistically, and on the basis of this data, I made a report which I filed with Politburo (“Political Bureau” – the executive committee of the Communist Party). I wrote that she did not guess on 100 %, but enough to require a thorough research, because she was a true phenomenon.

Have you come across a similar person like her?

I have studied many individuals with extraordinary abilities, not only in Bulgaria, but abroad as well. Parapsychology is my first love. Before founding the Institute, I used to ride on a motorcycle throughout Bulgaria, looking for parapsychological phenomena. I had registered about 45 people. In order not to get arrested, some friends from the Bulgarian Academy of Science gave me a certificate that I am examining these people with a scientific purpose. During those years you could not openly talk about extra-sense phenomena and psychics – they would send you to prison for such things. Even while studying Vanga, I had problems with the authorities. They would constantly call me into the Central Committee of the Party. Barumov, now already deceased, from the the Propaganda Department, told me one day: ” D-r Lozanov, because of you the young ones started wearing crucifixes. You say that Vanga could prophesy more than anyone else, and they started believing in God, because she claims she’s in contact with God.” Indeed, from all 45 phenomena I had registered, Vanga was the greatest one. A remarkable, outstanding phenomenon.

Scientists from all over the world would come, famous ones. They would all go to her, but officially, they were all reserved.

Do you think she was monitored or wiretapped by the secret services?

My own phone was wiretapped, let alone Baba Vanga’s. I once had a phone call with someone abroad and the call went on for a long time. At one point I heard a voice in the receiver say: “Hey, Doctor, hold on a while, so we can change the tape. ” State Security were at their job. They were afraid of Vanga, so they wiretapped her, monitored her. When they searched me at the airport, they asked if I was carrying materials about Vanga. They were thinking that I had some secret information from her, which I would take abroad, while I didn’t have a single piece of paper.

Did you talk to her on similar topics – about the power of authorities, the political system and so on?

Never. I was only interested in science. After my first visit, I never again asked her to prophesy for me in a personal aspect. Vanga was a clever person – she wouldn’t risk talking about things that could get her into trouble with authorities. I personally, have not heard her make predictions of a more global character – at least at the time. But they used her name to various purposes. She was a kind and tolerant person, deeply religious.

What is the destiny of the documentary you filmed together with the camera operator Nikola Toshev?

When they expelled me from the Institute, I delivered my whole archive to the new director – d-r Noncheva. They wouldn’t let me take anything! The whole archive about Vanga – these were boxes with questionnaires and other materials, including the documentary movie – was left there in December 1984. I still keep the protocol, signed by Noncheva, that I have handed everything to her. In the list there are 30 movies, among which the one about Vanga. From there on, she was responsible for the documentation, and the Institute was closed down in 1988.

Have you tried to recover this archive? After all, these are all materials from your research?

In 1993 I filed a report with the Minister of Education, in which I insisted to have my whole scientific research, including the documentary about Vanga delivered to the State Archive. His answer was that they would do what is necessary for this to happen. To this date, there is no result. Where all the materials went, in whose hands they passed, I have no idea. But at least no one can use them, because I have encrypted the information! I had suspicions that one day such a thing could happen.

What was the content of the documentary on Baba Vanga?

It’s a black and white documentary, in two parts. Toshev did not manage to shoot the best moments, but such in which Vanga would try to get information from the visitors. There were cases in which she said very precise, extraordinary things, but they remained out of the movie.

Is there a copy of this movie?

The only thing I have are some notes, which I was taking while making the report about Vanga.

Our scientists never manage to reach an authoritative conclusion about her, and she was the greatest prophetess of the XXth century in Bulgaria.
This is exactly what I wanted to do. But since I no longer have my research materials, how could I do it? D-r Noncheva should have told me where the archive is! If she has let it be lost, that’s her fault. If she has taken it, she should return it back to me, because this is not her research. I will prepare a scientific publication in which I will give a positive conclusion about the phenomenon of Vanga. But this is not enough. I never actually managed to finalize my research – I managed to process only one third of all collected materials. My conclusions on Vanga have would probably been different If I had managed to get things to an end.