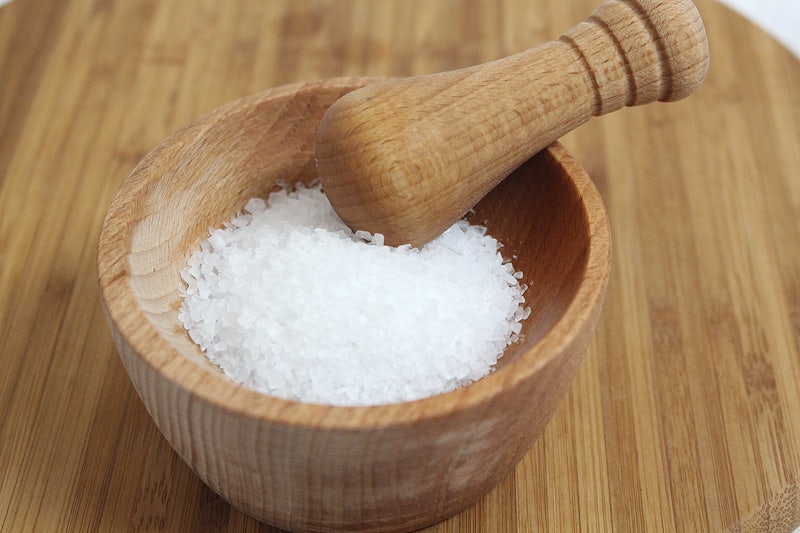 The opinion that salt is harmful and strains the heart and the kidneys is widely spread. Folk medicine recommends a diet without salt if you have heart and kidney failure and if you have a disease of the liver.

Why then ancient Greeks sucked small pieces of sea salt after meals?

Doctors think that the human body can receive the necessary quantity of salt only from fruit, vegetables and bread. At the same time, to people with hypertension they recommend one tea spoonful of sea lettuce (laminaria or kelp) after meals. One litre of milk contains 4 g of sodium chloride; potatoes contain almost the same quantity. Doctors say that healthy kidneys must release 25 g of salt for 24 hours.

We take from 12 to 15 g of salt (sodium chloride) with food per day. The Russian academician, Boris Vassilievich Bolotov, a very well known scientist, chemist, physicist and biologist, recommended putting 1 g of salt on the tongue and swallowing the saliva after a few seconds an hour after meals. He also said that we should put a little salt on vegetables, fruits, cottage cheese and butter but never add oil to them as oil causes bile secreting. Bile slows down the transformation of slag (waste products into soluble salts which are excreted from the body together with urine and excrement). Some herbs help the removal of salts from the body as they act as solvents. For example, tea from knotgrass (Polygonum aviculare), watermelon peel and sunflower roots is suitable for alkaline salts. You can use the juice of black radish, horseradish, chicory (Cichorium intybis), and coltsfoot (Tussilago farfara), and parsley roots to dissolve the mineral salts which precipitate on the blood vessels, the renal pelvises, the gallbladder and the bladder.

The formation of salts in the body is increased by the failure of the pylorus or pyloric part, which connects the stomach to the duodenum (the first part of the small intestine immediately beyond the stomach). In this case stomach ferments get in contact with the ferments of the duodenum and this leads to gastritis or inflammatory bowel disease.

Salt as a remedy

The Russian academician B.V.Bolotov claimed that sea water is extremely useful for the skin. He also recommended rubbing a mixture of cod-liver oil and meal of fish scales into the body an hour before you bathe in the sea; this, he said, is an effective way to cure dermatosis (skin rashes). Salty lard is also suitable for this purpose.

It is very good after a sauna to put honey on your body and to add a little salt to the honey. It will make your skin smooth and elastic.

Inhalations with sodium chloride protect the lungs from allergies. The kidneys and the pancreas need salt to produce hormones. In the past Chinese scientists used salt to treat ill kidneys.

From ancient times this very useful mineral has been a symbol of friendship, eternity and wisdom. Sodium chloride plays a very important role in the process of metabolism.

DeForest Clinton Jarvis (March 15, 1881 – August 18, 1966) was an American physician from Vermont. He is best known for his writings on the subject of folk medicine. He recommended a mixture of whole, raw apple cider vinegar and honey that have variously been called switchel or honegar, as a health tonic. He defined potassium as the most important element in building cells. Academician Bolotov claimed that salt is the main solvent of old useless cells; they must timely be excreted from the body so that they do not clog the canals. If you do not take the necessary quantity of salt, the electrolyte balance in your body is impaired.

In his two books Folk Medicine: A Vermont Doctor’s Guide to Good Health (1958) and Arthritis and Folk Medicine (1960) Dr Jarvis wrote: “Potassium enters into the composition of cells and draws the liquid in the cell. Sodium excretes the liquid from the intercellular space. The main sources of potassium are paprika (you can add it to all salads), honey, fresh fruits and vegetables. The best source of sodium is the most common salt.  To be healthy means to have a balance between potassium and sodium in your body. Deficit of salt leads to disturbances in the gastrointestinal, nervous and excretory systems.”

As academician Bolotov wrote, ancient Greeks sucked grains of sea salt after meals. Sea salt causes release of pepsins and pepsins improve digestion and help the degradation of old deficient cells. If you take one gram of salt after meals for six months, the number of young cells in your body will grow and the wrinkles on your face will disappear. Salt has been used as a remedy since ancient times.

Here are some simple and effective recipes.

Salty baths cleanse the body very well. Take them for ten to fifteen minutes for 21 days. The temperature should be up to 37-39 degrees Centigrade.

Nature has taken care of animals, too. When they run, they sweat and lose salt. It crystallizes under their fur and later pulls out the slag from their bodies.