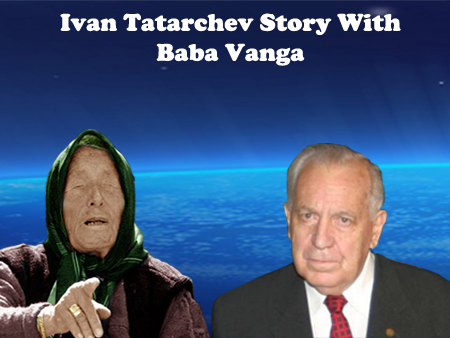 Story told by Ivan Tatarchev – a lawyer, and former General Prosecutor of Bulgaria in 1992-1999

I personally knew Baba Vanga from the summer of 1957, when I started my career as a lawyer in the town of Razlog. Most of my meetings with her were a secret, as I wasn’t allowed to visit her, plus Petrich was a border town. I was one of the people that was not allowed to be near a border area. That is why even Baba Vanga had personally criticised me, that by visiting her we will both get in trouble for nothing.

On my very first meeting, she accepted me right away. Baba Vanga knew my big family – it is famous in Macedonia. She started to list the names of some of my deceased relatives – my grandfather and his brother, and also asked me what is “Izdrizovo”. I explained that this was the most cruel prison in Yugoslavia where my uncle – D-r Asen Tatarski was sent into exile, and later sentenced to death.

From this meeting onwards my close friendship with Baba Vanga started, which continued until her death in 1996.

I was visiting her very rarely, as it was impossible to go to Petrich whenever I wanted. I took people to Baba Vanga so they can get a reading, and rarely wanted to hear anything about me. I just felt uncomfortable to waste her time with me, and to use her gift for my own gain. But eventually she told me some very interesting things about me and my relatives, some of which are too private.

Years back, she told me that the Government had wanted to send me to a camp, but an elderly man had saved me. This was the time when I was still working in Razlog – 1966. Indeed during this period I was deprived of my lawyer’s rights on two occasions, and I was under arrest a couple of times.

In one of my meetings with Baba Vanga, I came together with a friend of mine – she was a microbiologist. Baba Vanga welcomed her with the words: “what kind of doctor are you, when you don’t cure the people, but you focus on some microbes and animals”. She also told my friend that she will leave Bulgaria and will go overseas. Indeed after a couple of years, my friend left the country and settled down in South Africa.

Few years later, a friend mine who was living abroad, had undergone a surgery for cancer and came back to Bulgaria. He was very worried about his health condition, and asked for a favour to arrange a meeting for him with Baba Vanga.

When we reached her house, I entered first so I tell her about my friend. In the meantime he sat down on one of the benches right infront of Baba Vanga’s house. Her first words were: “What is this grave that I see infront of my door”? I sincerely asked Baba Vanga to save the bad news for my friend. This is what she did. She did tell him in details about his serious car accident, the surgery that he had, what exactly is his health problem…finally she finished by telling him that he will have grandsons.

Only two days after, my friend committed suicide. What a sad and striking story.

There was a period of time when Baba Vanga was strictly chased by Government. They were arresting her, beating her…Back then her fame was at its apogee and her future-telling gift was strongest. One reason for that was her young age as well as because when people suffer, they become stronger.

Over the years all this attitude towards Baba Vanga had changed. The so called atheists from the Communistic party started to visit Baba Vanga so she can give them advices and prophecies of the future. This is when her status quo improved significantly, and the Government dropped its charges and chasings for Baba Vanga.

To conclude my story about Baba Vanga, I want to say that she was an extraordinary person, an unmatched patriot. She was giving herself to people so selflessly. She raised her daughter and her grandson, by providing him an education. She had helped hundreds of thousands of people, and with her savings, they built the monastery in the Rupite region. With her death, I think Bulgaria lost a true Saint!