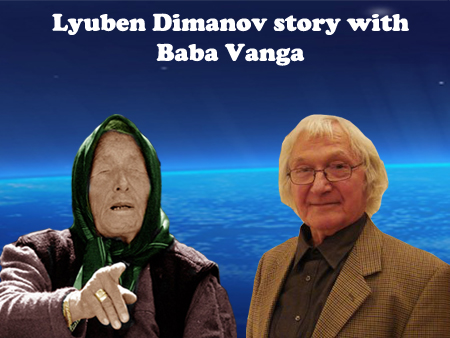 I was introduced to Baba Vanga by a friend of mine – Kosta who worked in France and had a great respect for this woman. When I visited Bulgaria in 1969 he offered me to take me to her. When we entered her house, the first thing she asked me was: – What type of art do you do – is it pottery?

– Graphics that get printed in large circulations. I quickly explained

– You will succeed! – said Baba Vanga

My next visit to Petrich was in 1974. I went with a friend who wanted to go on a business trip to Japan. Baba Vanga directly told my friend: – No, your trip to Japan will not happen.

Then she turned her head towards me and said something similar to what she said 5 years ago: – You will be very successful – it is “opened” for you.

Those words of hers stuck in my mind – at the time I had no idea whatsoever that I will work abroad. In the same year I went to Paris, and then in 1975 I came back to Sofia carrying a work contract for a very prestigious French gallery. For few months I didn’t know what to do – back at those days of Socialistic Bulgaria it was not easy to get an allowance to leave the country and work abroad. Finally I went to the Bulgarian Artist Union and asked Svetlin Rusev for assistance. He and Lyudmila Zhivkova (the daughter of the socialistic leader of Bulgaria – Todor Zhivkov) helped me solve the issue. While I was waiting for the documents to be processed, I visited Baba Vanga again.

– You will not have obstacles to leave Bulgaria and go to France. Your house in Paris will be similar to your house in Knyazhevo (suburb of Sofia).

Indeed, after me and my family were searching for a place to live, we found a house in Paris that really reminded me of my own house in Sofia – the area was very beautiful with artistic broad-leaved woods. In my first years in France, I was receiving many warm messages from Baba Vanga through my friend Kosta. She advised me not to come back to Bulgaria until I become recognized in France.

Over the years I spoke with Baba Vanga for quite a lot of things. Often she used to say that there is reincarnation. She said: If the sky is opened, I will tell you, if not I can’t read nothing. She was scared no to go in deep trances, as when she is in such a state, she says about things, that the superior powers are not allowing her to say.

In 1975, before I go to Petrich to visit Baba Vanga again, I told Svetlin Rusev to come with me. At first he refused, but at least he gave me sugar over which he slept for one night. From the door Baba Vanga said: Give me this sugar – it’s Svetlin’s. He is like me – when there are too many people around him, he get sick. Tell him to come over to see me.

One time, I was worried about my health. I asked Svetlin to call Baba Vanga (they were very friends already) and to tell her that I am in Bulgaria.Later I found out from him, that I shouldn’t be worried – it is not serious. Then when I saw her in person she sent me to a doctor in Kyustendil – she gave me his name. I visited him, he examined me thoroughly and prescribed me some medicines – I healed completely!

I visited Baba Vanga for the last time couple of months before her death. Even though that she was sick and lying on a bed, she offered me to read on me. She was using a lot of symbols in her readings, so you had to make sense of her words long after your meeting with her. Sometimes you realize what she had said, years after – when the prophesy becomes real.

Baba Vanga was a true phenomenon – she was saying everything. She predicted many things from my own destiny. She also had given me numerous advices , that have guided me through my successful career and personal life. There were many people in France that have heard about Baba Vanga. On one exhibition of Svetlin Rusev they sold a portrait of her. I assume that it was sold not only because of its art value, but because the person that bought it knew very well who Baba Vanga was. This happened around the 80-ties. Baba Vanga asked me once: – So they bought a picture with my portrait eh? Do you know how much they bought it for?

– No, unfortunately I don’t – I answered her.