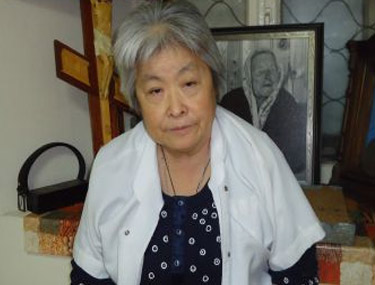 Lyudmila Kim is a famous Russian healer and psychic

– Lyudmila, you are a well known healer in Russia but you were very close with Baba Vanga (Baba Vanga was a very famous blind Bulgarian prophetess, a visionary and healer, who could speak with dead people). Tell us about your friendship.

– We had a long-standing friendship. We were very close but few people knew about that. Today most of the people, who were near her, parade with her, boast and even dare fabricate predictions on her behalf. I am not one of them. I loved her. We really had a wonderful long friendship.

Actually, years ago, when Baba Vanga received patients in her small house in the town of Petrich, I wrote her a letter and told her about my problem. I was surprised to receive an answer to my letter. She invited me to visit her. So I did. A friend helped me as it was very difficult to go to Baba Vanga during the time of the socialist regime. Besides, as Petrich is near the Greek border, you could go there only with permission from the police.
We liked each other immediately. She was very special. Baba Vanga could feel the aura and read negative thoughts. She knew everything! She felt how big my problem is. I have a very ill son.

Baba Vanga is my spiritual mother!

Frankly speaking, at the beginning I was a little afraid of her. She was so famous, respected by all Bulgarians and Russians. And she radiated incredible energy. Maybe not all people can feel that but I felt it with my body and soul – a force, which is filling me. I felt respect, love, humility and fear; I felt her force and power. I had a very big hope that she would be able to help me. She was the only one who told me what the matter with my son was and what the reason for that was. Baba Vanga tried to cure him but she could not finish her work. She was my closest friend.

– Why are photos of Baba Vanga everywhere in your office?
– Because she charges me with positive energy from space and protects me. She also charges and protects my patients. She is here. I feel her presence. She often comes in my dreams and advises me. Our spiritual connection has always been very strong, especially lately.

When I don’t know how to cure an illness, she tells me from the netherworld. I have visions with her. After I do what she tells me, I manage to treat a disease which I could not treat before. Baba Vanga is my guide, my light, and my spiritual mother.

– How do you accept her – as a visionary or as a healer?
– Baba Vanga is a phenomenon. For me she is a martyr who lived on the Earth. She is a saint! I am not interested in what people say about her and what they write about her. I was near her and she is a saint for me. Now, in the netherworld, in another dimension, she is friends with Saint Petka of Bulgaria and Saint Matrona of Moscow. They are together. Baba Vanga protects everybody. I am absolutely certain that the three saints are together. Baba Vanga’s soul was taken by Saint George the Victorious of Bulgaria. He came on his white horse in a red mantle and took her soul. I see these things. Look! The icon of Saint Petka is lighting! (I turned to the icon in Lyudmila’s office and saw unusual light).

– Do the predictions of Baba Vanga come true?

– Is it true that Baba Vanga had a prediction about Syria?

– Yes, she had. But she didn’t say her predictions directly but allegorically. You need a high intellect and understanding to interpret her visions correctly. Baba Vanga always spoke about Russia with big love. She said to all Bulgarians, “Hold on to Russia!”

About Syria she spoke fondly with pity and sorrow. I don’t remember exactly how her prediction sounded. I think she said, “Poor Syria… stone upon stone won’t be left!”

– What exactly did Baba Vanga do for you?

– I’ve been looking after a very ill child all my life. My son Alek is very ill. Baba Vanga helped me and told me why he was born like that. Alek is an autist. The reason for my son’s disability is the great-grandfather of my husband who fought in Indonesia on the side of the Dutch.  He killed a child by chance, and the child’s mother cursed all his family. Autism can be cured. There are prayers for it. I believe in prayers. They depend on the will and the energy of the person. Even cats like good words. Once, when I was at Baba Vanga’s house, a young girl came. She couldn’t walk. She received and injection, put in the wrong way, and her legs were paralyzed. Baba Vanga told her that she will recover and will walk again. The first time when I saw the girl, she was crawling. The next time I saw her, she was walking. She had come to thank the prophetess. She walked, she was cured!

– Who of the well known Russians visited Baba Vanga?

– I think that at that time there was no politician or an artist who did not visit her. The famous Russian singer, Alla Pugachova, the well known actor, Viacheslav Tihonov, and the writer Leonid Leonov visited her. She lovingly called Leonov “my Lionia”. The Soviet leader Leonid Brezhnev often visited her. She said that she would die two years after him. And she was right. He died on 8 August 1994, and she died on 11 August 1996. Baba Vanga knew exactly when what would happen. She knew when people would die but never told them directly. Once she told Brezhnev to leave. He came and haughtily said, “Do you know who I am?” – “Yes, I do. You are a big boss but be ready. Soon you will be as small as a nut.”