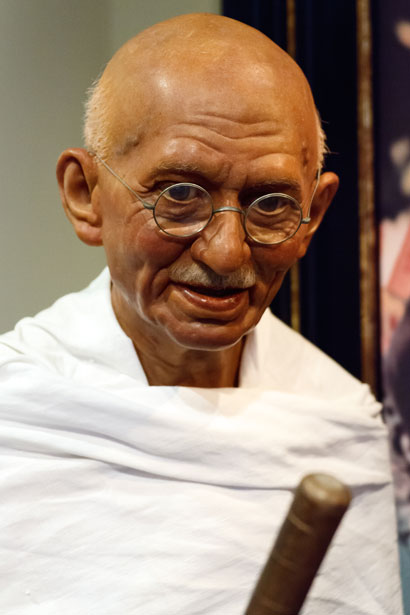 When I feel despair, I remind myself that throughout history, the path of truth and love has always won. There have been tyrants and murderers who for a time seemed invincible. But in the end they always fail. Think about it, always.

There are two days in the year when we can’t do anything—yesterday and tomorrow.

Tireless and unceasing perseverance are the price to be paid for making faith a rich and unerring experience.

The endless pursuit of the best is a human duty. It is a reward in itself. Everything else is in God’s hands.

Peace in itself is a reward.

There is no belief worthy of the name if it is not entirely good.

Nothing saddens me more in life than the hardened hearts of educated people.

I will not allow anyone to trample on my mind with their dirty feet.

Something that is true for an individual may be true for a nation tomorrow—if individuals show will and refuse to lose their heart and faith.

Anyone who manifests will can hear the inner [divine] voice. He is in everyone.

It is not wise to be too gullible to other people’s wisdom. It is wise to remember that the strongest can wither and the wise can err.

A man becomes great as far as he works for the welfare of his fellow men.

The quality of our work will please God, not its quantity.

Beauty is in the purity of the heart.

A nation’s culture resides in the hearts and souls of its people.

The enemy is fear. We think it’s hate, but it’s fear.

Better to be violent if you have violence in your heart than to disguise yourself as non-violent to cover up powerlessness.

Rationalists [materialists] are remarkable creatures. Rationalism is an ugly monster when it claims almightiness. Attributing almightiness to logic is as bad as idolatry—as it leads to the worship of logs and stones considered to be God.

I would rather see the extinction of the human race than see us become lower than the beasts by making God’s noblest creation – woman, the [soulless] object of our lust.

A morality that depends on the helplessness of a man or a woman has little argument in its favour. Morality is rooted in the purity of our hearts.

It is always better to stand upright with a cracked and bandaged head than to crawl at someone’s feet to keep your head.

I do not believe that the increase of wants and the machines created to satisfy them bring the world one step closer to its goal. With all my heart I despise this mad desire to destroy time and space to increase animal appetites, and to go to the ends of the earth in search of their appeasement. If modern civilization is built on all this, and my understanding is that it is, I call it satanic.

I have also seen children successfully overcome the influences of evil hereditary qualities. This is due to purity, which is an innate quality of the soul.

The rich cannot accumulate wealth without the participation of the poor in society.

Capital as such is not evil. The evil is in its misuse. There will always be a need for capital in one form or another.

There are so many hungry people in the world that God cannot appear to them except in the form of bread.

Rights that do not arise from a duty well performed are not earned.

If I didn’t have a sense of humor, I would have killed myself long ago.

Roots of violence: Wealth without work, entertainment without consciousness, knowledge without faith, commerce without morality, science without humanity, worship without sacrifice, politics without principle.

If by strength is meant moral strength, then woman is immeasurably stronger than man.

A woman’s true ornament is her character, her purity.

A man should forget his anger before he goes to sleep.

Seek not great wealth but simpler joys, not higher rank but deeper bliss.

Every night when I go to sleep I die. And the next morning, when I wake up, I am reborn.

Man’s happiness is truly in being content with what he has. He who is not satisfied, regardless of his possessions, becomes a slave to his desires.

Whatever you do may seem insignificant [doomed] to you, but it is extremely important that you do it.

There is a power in the universe that, if we allow it, can flow into us and produce miraculous results.

Truth dwells in every human heart, and one must seek it there, guided by the truth as he understands it. But no one has the right to force others to act according to his personal view of the truth.

Don’t judge others. Be your own judge and you will be truly happy. If you try to judge others, you will probably get burned.

Faith must be strengthened by knowledge. When faith becomes blind, it dies.

No human words can cover the distance taken by even the quietest voice of conscience.