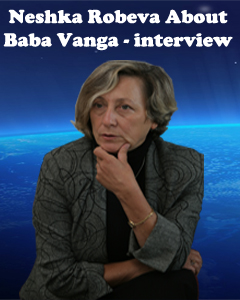 – Is it true that Baba Vanga, with whom you were very close, had advised you to get into politics?

Yes, it is true but she said something else which I won’t reveal…time will show. So far her predictions about me are coming true.

– As of today have you completely closed the politics subject and are you disappointed from it? Yes I have closed that page. I am not disappointed, but I am rather desecrated.

– Since water gushed out of the well at the Great Basilica in Pliska, and Baba Vanga had said that Bulgaria will gradually get better – do you believe her words?

I do believe it, if of course she had said that. I haven’t personally heard about that. In my opinion Bulgaria will start to improve, as we had already reached the very bottom, and I can’t image if we have to go even further down.

– Had Baba Vanga revealed to you something about the future of Bulgaria or the world?

She had told me many things. I have publicly shared some, but others I have kept a secret. Once I remember she mentioned that the Balkans will improve their living standard when three mayors of Balkan cities that start with the letter “S” sit on one table and negotiate. Her world’s predictions weren’t very optimistic. She had said: “Neshka, let’s pray to God to save the world. Human’s greediness will destroy it.” Bulgaria is part of that. Wasn’t the greedy interest of some businessmen that ruined our country – look at the illegal constructions at the seaside, in the mountains, in Pamporovo, Bansko, Borovetz. Greediness and this sickness to constantly want to have more, have driven some people to the point of insanity, without taking into account that they are mortals. Some of them are already gone, others got killed. So I am asking – what have they brought up there? They will always have this sin on their shoulders – they ruined the nature. They are infidels. Those people have this wrong belief that when they have enormous wealth, it will make them immortal.

– Is this the reason why Bulgaria is suffering – because Bulgarians are infidels as Baba Vanga had said? Do you think that schools in Bulgaria have to include religion in their mandatory curriculum?

Baba Vanga had said: “Bulgaria will suffer because Bulgarians are infidels”. I think that even though faith is something that is given to you, it is not taught, it will be really useful for children to get to know the philosophy of Christianity.

– Baba Vanga had advised you to read the bible when you are having hard times. Do you have favourite paragraphs from it?

Yes I do. The bible gives knowledge, consolation, hope. I read it, but not systematically. I love reading Ecclesiastes, the parables of the Gospel, and the Epistles of Apostle Paul. When the priests pick up the subject
“Baba Vanga” and begin to anathematise her, I always find a refutation of their words in the Bible, particularly in the Gospel.

– Do you read the books of Peter Deunov?

They can always be read. Baba Vanga had often said: “Read Deunov, he says the truth”… He is one of the world-renowned spiritual teachers of humanity, or I should say recognized by those that have senses and believe that the world is something much more complex in terms of both matter and organization, than what the human intellect can touch or perceive. Peter Deunov, Baba Vanga, Edgar Cayce and others like them are messengers, and their knowledge and advices can be used by people, that are relived from the complex of doubting Thomas.

– Which advice or words of Baba Vanga you are recalling the most?

Every meeting with Baba Vanga was a lecture on the science called “life”. The way she lived, the ease with which she refused to accept any opportunities for a more comfortable life. Her modesty, humbleness, forgiveness were hard to describe. Everything, every second with this woman was unique, fulfilled with so much content. I would often recall some of her words: “Don’t complain, fight hard in life, first give, and then receive…”