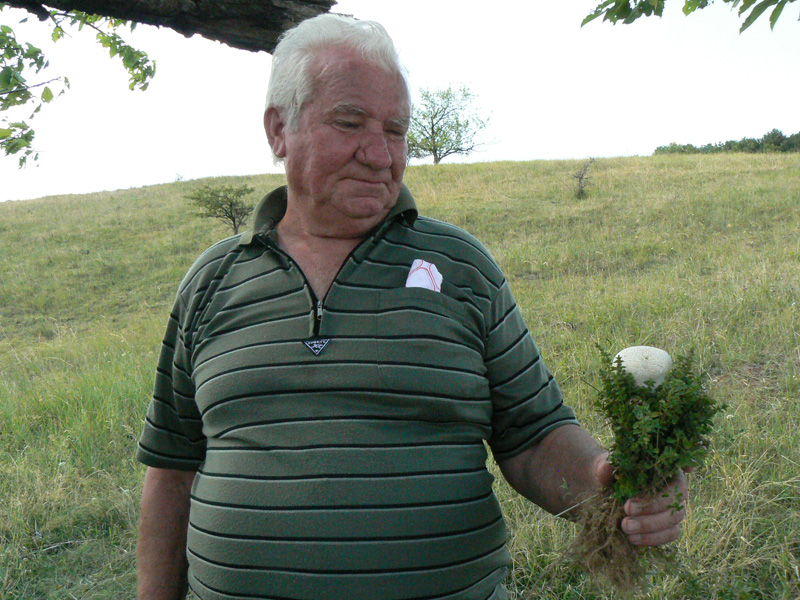 “Bai Kolio (BAI is untranslatable word to address an older man), I have a lung cancer. Doctors say I am gone. You are my only hope. If you save me, I will be grateful to you till I die!”, almost cried Todor from the city of Varna last year. The carate fighter became ill when he was at the top of his career. He was in many hospitals, went to various doctors, fortune tellers and sorceresses but the insidious disease did not leave him. Eighteen months after he was caught in a vicious circle day and night, Todor remembers: “I was going to be operated. The doctors told me they will cut my lung like a slice of bread. I was dying. I spat blood. My lung was decayed like a sponge. When I heard the terrible diagnosis, I had the feeling a hammer was dug in my brain. I escaped from the hospital to avoid the operation. I found Bai Kolio through an old pal. For a year I drank his herbs. When I realized that I had escaped death, I jumped with a bungee from the highest bridge in Varna. Here I am, living a second life thanks to Bai Kolio, my Guardian angel.”

The grateful patient is so happy he had got rid of the mortal disease. He spins like a puppy around Bai Kolio and praises him to the skies. He goes to see him every Friday when Bai Kolio comes to Varna. His herb shop is in a village near Varna but at weekends Bai Kolio comes to Varna and gives free consultations to people in need. All Bulgaria knows him as Fidel Castro’s healer. When Castro was in Bulgaria, Bai Kolio went to Sofia to heal the Cuban leader with his magical herbs.

On Friday afternoon his car is full of bunches of herbs, and around it there are so many people – like a turbulent bees hive. People from all over Bulgaria have come to find a cure. A man from the city of Burgas has come to find herbs to cure diabetes, another has varicose veins, and a third one has nettle-rash.

A woman comes out of the house in front of which Bai Kolio has parked his car. “You know, I had a tearing pain in my stomach. I could neither eat nor sleep. Kolio gave me some herbs and now I can eat even onions and garlic!”

Bai Kolio is a healer of the seventh generation. His relatives cured everybody.

“I know how to gather herbs when I was a little boy. I saw how grandfather prepared the recipes but I became a healer by chance’, says Bai Kolio.

His name is Nikola Atanasov. In 1974 he nearly cut his hand while working in his garage. Then he had problems with his lungs. The doctor who examined him advised him to study in the medical college. As a soldier in the barracks he was a paramedic. After that he studied veterinary medicine. His grandfather, Nedelcho Naumov, introduced him to herb secrets. Nicola’s medical knowledge was like manna, it helped him a lot. The healer combined hundreds of recipes. He found a formula to cure mastopathy. His relatives’ recipes were very useful to him but he always added a little of his own.

“I have spent my life in making discoveries” Nikola Atanasov jokes. His practice is full of curiosities. “I have cured colon tumors, gynecological problems, prostate, and polyps. My greatest success was to cure stomach cancer. A man, Jamil Yuseinov, had a stomach cancer. The doctors opened his stomach and closed it as they could not do anything. The man drank my herbs. He has been alive for 25 years already, safe and sound.”

Bai Kolio takes out a very big notebook. This is a Thank-You Book from patients: Thank-You letters from accountants with breast cancer, lawyers, and cooks. All consider him a savior, a healer of ovary cysts, spine cancer, myoma, bedwetting, rheumatism, and laryngitis. Yovcho Mitev from Burgas wrote an epistle:”Doctors are no good. I was fed up with diets. I suffered from jaundice. I drank the herbs of Nikola Atanasov, and now there is no sign of the disease”.

Linseed is among the most effective herbs of the healer; it cures inflammations. Bai Kolio gathers St John’s wort (Hypericum perforatum) and red cilantro (Eritraea centaurum), sumac (Rhus cotinus), camomile (Matricaria chamomilla), hawthorn (Crataegus monogyna) and linseed. The healer’s work is a closed cycle: together with his wife he gathers the aromatic herbs; they dry them, grind them and make various mixes, ready to drink.  A mix contains at least ten herbs.

However, Bai Kolio does not give away the secret of his mixes. He says, “A chef won’t give you his recipes, will he? Neither will Coca-Cola Company”. His eyes, blue like deep mountain lakes, sparkle with humor.

“I tell people not to give up. The treatment is very difficult if they had had chemotherapy. Necroses happen. My procedures are short and good. I help as quick as I can”, Nicola says.

He has a trainee, an “agent” as Bai Kolio calls George Ivanov. The healer saved his aunt from colon cancer and his mother from mastopathy.

It is time to stop the interesting talk as Bai Kolio has to go back home where a lot of people are waiting for his help.