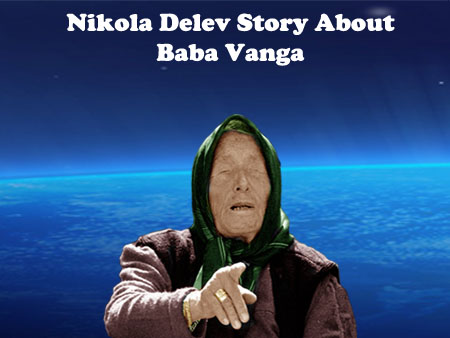 Nikola Delev is one of the most respected master goldsmiths from the town of Strumitza. He has been  a very good friend of Baba Vanga for over 17 years. She had asked him to build an orthodox church in Strumitza after the name of The Virgin Marry, as she is the protector of the city.

Nikola had given his word to Baba Vanga that they will built the Church. In 2006 the construction starts, and the project of the Church was approved personally by Baba Vanga.

Baba Vanga was a very wise woman: at first her words might sound simple, but in most cases they will carry a sacral knowledge. She was not using complicated words, but her words had big truths in them, many of which were not understood by the majority of people. Those that were spiritually enlightened could grasp the context of what the prophetess wanted to say. She was also a philosopher – and at the same time such as good soul. Some say that she was quite strict. Well for those that were doing bad things what do you expect her to be? And she had to constantly deal with both extremes – good and bad people. When she was seeing the good in people, she would be as happy as a child.

Every time I met her she would censure me as she was my mother. She was telling me to never get too proud of myself, or to motivate all my actions on money and women. “Eh Nicola, you are being too materialistic lately, be careful with that.” I was quite young back then, and indeed I have couple of things on my mind that I wanted probably the most – money, cars, women, glory… Now I suggest we all have to be very careful with those thing, as we pay a great price over the years – I did pay a big price myself. Baba Vanga was teaching people to live a humble and happy life – I couldn’t quite understand her back then, but when I got older, all of her messages started to make a lot of sense.

Once I remember we spoke about the two genders – men and women. I asked her why she doesn’t say that she hasn’t seen men that are whoremongers, and every second woman had a slutty behaviour. She said: “The problem is not in men – it’s in women. Women create the temptation – they “raise their tails” and provoke men. And if he is a man, it is in his nature to follow his instincts and go after the female that has given him the “green light”. Women on the other hand abuse with men’s weaknesses – when they see that someone loves them, they become very presumptuous. They cross the limit, and start to want more, start to command and control their partners, and to cheat on them eventually…”

If I did comprehend just a fraction of what Baba Vanga tried to teach me, I wouldn’t have had so many problems with women. But apparently that was part of my destiny, and the prophetess used to say that nobody can escape from his own destiny path. Now when I analyze my life – all of the gold and money that I’ve had over the years, can’t give me anything in comparison to what I’ve received from my friendship with Baba Vanga.

Considering that I am a goldsmith, I did give her a lot of gold jewels made by myself as gifts. She constantly wore one ring and one thin bracelet that I gave her. She would take-off the other jewels when having visitors, as she didn’t want to create the wrong perception in people that she is materialistic, and loves to wear gold – which we all know is expensive.

Three times Baba Vanga had sent women to my jewel store, so I make them rings, so when they wear it they will get pregnant. Eventually all three got pregnant after I made their rings. Once I asked Baba Vanga why I was the one that had to make those rings – and she told me because I was blessed by my ancestors.

Once my mother told me a story that when I was three days old, my grandpa Nikola (I am named after him) came to see me, and he destined me with his words to become a good goldsmith. My grandpa was very spiritual and a strong believer, and apparently God has heard his pray, and his  blessing came true. Baba Vanga used to say that every single person has some sort of skill and talent, and if he finds it and develops it – it means that he is following the right path, or the path that God had written for him.

She told me once that if I let the gold to command me – it will destroy me. I had so much gold coming through my hands – thank God I did resist its temptation and didn’t allow it to “control” me. It is the same principle with money – if you command them and not the other way around, then there is an effect. If they command you, then you better not have them.

Since Baba Vanga passed away, I don’t stop to think about the request that she had for us: to build an orthodox church in Strumitza. In 1990 she started to talk about that: “I see it Nikola, big and beautiful church – one of the greatest on the Balkans.” Then the municipality of Strumitza launched a public auction and 12 candidates applied for the project. I photocopied the projects and brought them to Baba Vanga so I ask her which one she likes the most. Indeed the project she pointed out, was the one that won the auction – prepared by d-r Yanko Konstantinov.

I understood many of Baba Vanga’s words not until now, when so many years have passed. With few sentences fulfilled with great messages, she was able to write “novels”.

Quite often I think about the many things the prophetess told me. I won’t forget when she said that there are great challenges ahead of humanity, and this will act as a trigger for mankind to unite: “Nikola, a day will come where water will be more expensive than gold.” She wanted to emphasize that an ecocatastrophe is awaiting us. Apparently there’s a lot of punishment for us in the future , and if our leaders are smart, maybe we all won’t pay such a high price.

Baba Vanga would always say a good word even to a bad person – stimulating the good in him. Similarly to Jesus Christ, to all insults, slanders, and lies, she would return love and goodness. She was a real personification of the Jesus’ principle: “If you approach me with a rock, I will approach you with a bread.”

In one of my conversations with Baba Vanga the main theme was why she settled in the Rupite region. She told me: “This place is ancient and sacred. I see the first people that lived here, many centuries ago. They were tall, handsome, well fit, and were carrying water buckets from a far distance. Over time a volcano had erupted and destroyed their village. Also this is a place where some aliens come.”

She asked me whether I have read anything on the subject, and I said that I didn’t. Then she explained that aliens were visiting her – they were wearing clothes that look like fish scales, and were like chicken with plumage. “They are good, they come to help humans”, she further explained.

Baba Vanga liked to talk about the deceased, but she admitted that they tortured her with their constant questions.

Baba Vanga knew many secrets, truths, and recipes – I really feel sorry that I didn’t write down most of them. One of her significant predictions that I remember was that people will discover the cure for AIDS and cancer, but many other serious diseases will appear.

I do recognize that I am one of the few lucky people on this planet, that had the privilege to be so close to this extraordinary phenomenon. Being around her, I did change completely – she did open my eyes for the big truths.