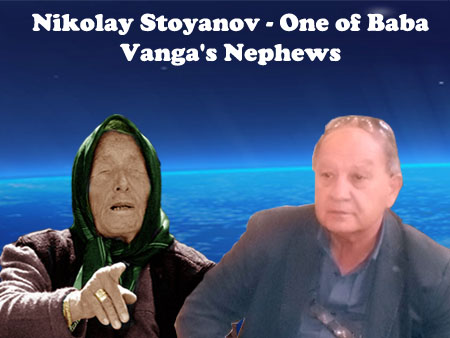 Mr. Stoyanov, is there anything that you didn’t share in your recently published book called “The Case Baba Vanga”? If yes, was it due to lack of space, because of an internal “censorship”, or to save the “material” for another book again dedicated on Baba Vanga?

I don’t have the feeling that I didn’t say everything that I wanted to share in this book. However, I do know something outside the scope of my book that I was told by my good friend – Toma Tomov, who made a magnificent film about Baba Vanga. He told me that the adopted son of Baba Vanga, who is a prosecutor in Petrich and Chairman of the Foundation “Vanga” told him that the prophetess had shared with him when would be the end of the world. He vowed not to tell anyone, as Baba Vanga asked him not to. And because this is not a first-hand information – it could be true, it could be not, I decided to not included in my book.

Which is one of predictions made by Baba Vanga that you cannot forget?

As a child, adolescent and student – were the periods when I had contacts with Baba Vanga most actively.  In fact she was at my wedding, but I had never asked her to read on me. I felt terrified of the idea to learn things about your future that you should better not know, otherwise you lose the motivation to live.

Svetlin Rusev who was also very close to Baba Vanga, shares my opinion – he never asked Baba Vanga to tell him anything about his personal life.

You are the first one to disclose that Dimitar Gushterov – Baba Vanga’s husband, had to leave his fiancée Zoitza, in order to marry the prophetess. According to the old customs, such an act was considered very sinful, not to mention how Zoitza felt as a result of his decision. That being said, Dimitar must have had this personal drama, an internal conflict and even guilt, that was “eating him up” for all those years. This is what you imply in your book, and also share your opinion, that this is likely one of the many reasons why he had this weakness to start drinking alcohol, and later died of cirrhosis.

I had forgotten this story, and when I spoke with Evtim Evtimov about Baba Vanga’s daughter, he refreshed my memory about her husband. Since I wouldn’t publish something for which I am not 100% sure, I went to Baba Vanga’s house, and spoke with the curator of the complex. They confirmed the information that they knew personally from Zoitza.

Everybody else that I asked, said the same thing, so this was my key to the question why this marriage happened in the first place.

My ant who was not only a very beautiful woman, but also very suggestive, had told Dimitar once: “Listen, you will lose nothing. Baba Vanga is a very decent woman, a great person. She is a very good cook, she knits very well, she is extremely clean and tidy. Besides with her phenomenal gift, you will never run out of money”.

On top of everything Baba Vanga had accurately told Dimitar, where are the golden coins if his murdered brother. They had found him on a farm field, with his head crashed.

Dimitar was a very good man, but he wasn’t spiritual at all. We wasn’t unique, nor an enlightened spirit so to  say: “I will kneel infront of this woman and will sacrifice my life for her”. He was rather an ordinary man was that was a gifted handyman – he could repair everything with his hands, and he even built their new house, by himself.

When my Ant asked Baba Vanga how did their first wedding night go, Baba Vanga replied: “This is none of anybody’s business” and she closed the topic once and for all.

In my opinion the marriage was consumed, but eventually Baba Vanga and Dimitar did not have children.

Dimitar must have had this vague feeling that since Baba Vanga has this futuretelling skills, they will always have money in the family. She didn’t ask for money, but people were so grateful so they often gave her some. Not to mention the period when she was officially employeed by the Bulgarian state. Baba Vanga contributed a lot of money for the Petrich municipality – we are talking about millions of levs. The fee for Bulgarians was much lower than the fees for foreigners.

So there were tax levies on her income?

No, all of the money went for the municipality. Baba Vanga had a Government salary. There were few other people that were also Government employees, who worked with Baba Vanga. She had a driver, a security guard, and a group of people that took care of her. They all had salaries from the Government.

There is something else. Today every second fortuneteller is claimed to be a charlatan and is both exposed and investigated. With the case of Baba Vanga, there was an “umbrella” from “above”. How do you explain this paradox?

A time had come when the authorities found out that Baba Vanga is a unique phenomenon that contradicts the materialistic and atheistic views of communistic Bulgaria. At the same time it was clear that this cannot be hidden for a long time, and sooner or later more and more people will find out. The huge interest in Baba Vanga could have created other serious problems, so the authorities decided to give her the opportunity to help people, in the form of “scientific research”. She had a sign on her door saying: “Subject. Institute of Suggestology”.

The head of the Institute was PhD. Georgi Lozanov. Not until you wrote that he was under home arrest for 10 years, nobody would have known his tragic fate.

He had a heart attack, then a stroke. His years of home arrest were more than 10 years. During this time, he didn’t come out of his home. They took everything he had worked on, they closed his institute, and they arrested him at the airport. He carried some recordings of Baba Vanga and her reading séances, so he can share these at a scientific symposium. This is why he got arrested. The authorities ruined his life, while the Russian scientists that were not slaves of the ideology to its extreme, were able to do a lot of examinations and research on Baba Vanga.

I admit, I was very surprised when I read in your book that Krasimira Stoyanova – Baba Vanga’s nephew, not only privatized and occupied the topic “Baba Vanga”, but she also stole a text about the prophetess that is not hers. Can you tell this story one more time.

Shortly before the changes that happened in Bulgaria, Krasimira brought me a draft of a couple of pages that were written on Baba Vanga. I was a publisher at “Flame” magazine at the time, and as being such, I thought that the idea to publish a book on the prophetess is very interesting. Krasimira was working with Lyubomir Levchev at the time.

The problem was that we can’t write a book with four pages, so I asked her: “Can you write it?” She replied: “No, I have never written a book before”. I told her that she can’t expect me to write it as I wasn’t ready, and also I had other important problems to solve at this time. Then I asked a friend of mine – Hristo Ganev, who had great respect for Baba Vanga and we also shared many spiritual views of the world, to meet with the prophetess and to take notes of what he had heard. We managed to arranged a couple of meetings, and Hristo was able to record enough material, so eventually he wrote that book, and gave it to me to be edited and later published. Krasimira came one day and took the book, so she can read it and add something from her. Then when she brought it back, I noticed that the name of Hristo Ganev as a co-author was missing – neither at the front, nor at the back.

I was really puzzled and directly asked Krasimira why his name is not on the book? She just replied: “Hristo Ganev has nothing to do with this book, this is my book.” I just told her to get out of my sight, and that I don’t want to see her again. Indeed this was the last time I saw her.

This syndrome is a typical characteristic of most people who are a relative of someone who is a phenomenon or a very famous person. This is why Baba Vanga had Veneta (who was adopted by Baba Vanga) as her “real” daughter for the rest of her life.