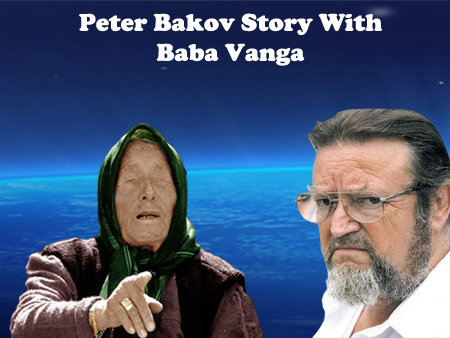 Petar Bakov and Baba Vanga were friends for a long time. She used to love his songs that were dedicated to her. On some of the songs Baba Vanga used to have moments where she would go into a deep trance and start saying very unusual things, that she wouldn’t have said otherwise. All those special moments with Baba Vanga were described in details in Peter Bakov’s book called “The alien side of Baba Vanga”. This book is one of the few evidences that show us how little we knew about Baba Vanga and her phenomenal ability to communicate with other superior than us beings, and to transmit information about the history of mankind, its creation, and its advance towards new stars…

Once when I was a guest of Baba Vanga, a young couple both very attractive, entered to see her. They also looked affluent. She started yelling at the girl: “When you knew that he had AIDS, why did you sleep with him?”

“Because I truly love him” – said the young girl with a shaky voice, and then started to cry.

“Well now you will die before him when you are so in love”. Baba Vanga got very angry and went into a deep trance shortly after.

I sent off the couple and when I returned I saw Baba Vanga’s bright-blue eyes were wide open. Her voice got deep and then she started talking: “Amon Ra is talking…here underneath your lands is buried the first writing of the first civilization. It is placed in a marble sarcophagus. Underneath the sarcophagus there is a luminous pyramid made of diamond, on top of which there is a crystal orb. In this orb is the key of the great secret. The orb is protected by a knight made of gold and unknown to humans alloy and energy. After a long time, the orb will be found by an enlightened man from your lands. Then humanity will enter the brotherhood of sanctity. Your creators will save you. Your sun will disappear and you will migrate to other stars…”

When Baba Vanga talked like that I was losing my mind completely. I am certain that she never shared those superior revelation with anyone. Often she asked me write a book about everything that I heard from her during her trance times, and to publish it when she passes away.

She had told me many things…I remember it was back in the 70-ties when she was telling me about the Ananaki giants who were living near Struma river (present Bulgaria) and who created the humans. She said: “All these lands here – Petrich, Melnik, Strumitza, Rozhen, St. Vrach, was all under water. Oh if you just know what kind of battles there were here on Earth. Over there where is the big curve of Struma river, there is a big rock – this is where the aliens landed on Earth for the first time. The have created us – we have not evolved from the monkeys. The chaos had created them, and they have created us. The chaos is full with intelligence. So those were the cosmic giants or the so called Ananaki. The came from the Andromeda constellation. The have created the Atlantes. They were over 3 meters tall and very handsome. By their choice they lived between 800 to 1600 years. Thousands of years ago, our land here was a priesthood centre. Also it is a shrine of devoted pagans. The pagans knew more than all scientists today. The pagans – these are the prophets, shamans, men of wisdom. Also in those shrines are placed people such as Philip and Alexander the Great, and many more, and many more…”.

Sometimes Baba Vanga would tell her prophesies with the greatest details – she was describing places, historical figures, events… She was truly great, enlightened by God, a real Saint. At the same time Baba Vanga was an ordinary woman. Very often in the evening she and I would drink a little shot of anise-flavoured brandy, and then we would start singing. I have literary sang thousands of songs to her, and have written numerous poems dedicated to her. She was carrying the energy of laughter – she knew how to make good jokes. She was a mortal person just like everybody else. When she had a “contact” with the superior powers, she would have become an alien. If she didn’t have such a contact, she couldn’t tell anything on anybody.

Unfortunately there were many people with very negative energy that were surrounding Baba Vanga on a daily basis. As she used to say, they are literary sucking the positive energy out of her. If it wasn’t them, she probably would have lived another 2-3 years.

Baba Vanga had this strange habit. Before she would physically start to consume her food, she would put her hands on the edge of the plate, and would not touch the food for some time. She was drawing the energy out of the food this way.

Baba Vanga was worried about the legal proceedings for Todor Zhivkov (the Communistic leader of Bulgaria). She used to tell me: “Do something about him, so they don’t convict him – he is a good man”. I was fairly close with the public prosecutor Ivan Tatarchev at the time so that’s why she asked me for help.

I have seen and heard so many miracles and stories over the years through my friendship with Baba Vanga. I realized many spirituals truths, and I am grateful from the bottom of my heart to this phenomenon named Baba Vanga!

I esteem her memory as a Saint. One day she will be recognized as such worldwide and she will be portrayed in many churches and temples. For now she is only painted in my small temple.