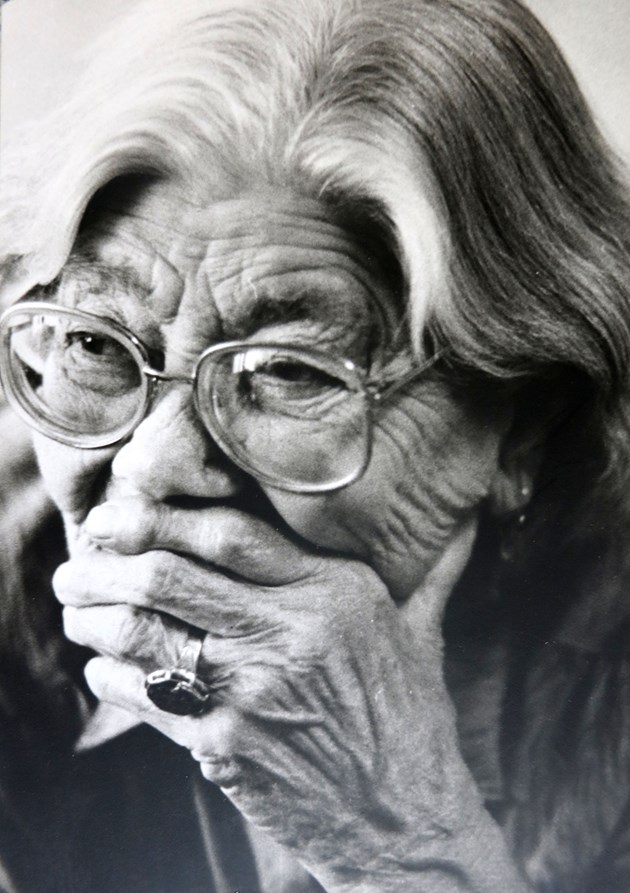 Slava Sevryukova was born on December 5, 1902 in Nova Zagora, then the Principality of Bulgaria.

Her maternal grandfather Rusi was a prominent Novozagorsk comita. An exuberant and proud nature, a ruthlessly accurate shooter of every Turk in sight during the Russo-Turkish War of Liberation. He joined General Stoletov’s militia unit.

Rusi’s wife and Slava’s grandmother was a meek and quiet herbalist who was helping people.

From this strange combination was born Slava’s mother – Maria, who inherited her mother’s gift, but also had Clairvoyant abilities. The gift was also inherited by Maria’s children – Slava and her three brothers.

The family was large and survived in poverty, and word of Slava’s unique clairvoyant abilities spread out throughout the town. Her relatives were worried that she will be accused of being a witch, and they married her while still a minor to Stepan Sevryukov – a Ukrainian White Guard emigrant. Slava was only 16 years old, and at that time she was taking care of the wounded free of charge in the infirmary, near her home, where she met Stepan – seriously wounded in the leg. Her parents added 2-3 years to the documents, making their daughter an adult and went ahead with the wedding.

“We entered a church. I’m like a hothead. I can’t see myself in the crowd. The guests were drinking, going crazy:

– The bride! Where is the bride?

Those who wore my veil thought I was a child, a curious little girl, staring at the wedding of the boisterous Ukrainian.

My husband, drunk and wobbly – same as the priest. They sang cheerfully: Stepan – in Russian, the priest – in Bulgarian. Stepan was 20 years older than me. I only found out about his age when my husband died.

Cruel and pitiful man’s world. This is how family life began. Far from the patriarchal idyll. Poverty up to the neck.”

After their wedding, they moved to the town of Shipka, near the Shipchen Monastery, where they recently got married. Her husband Stepan was an unsurpassed cook and worked as a chef for the White Guard emigrants – most of them aristocratic Russian officers. Slava helped many with her bright gift and was surrounded by attention from everyone. But at the same time, she feverishly was guarding her prophetic abilities and activities from Stepan, as she knew he will not accept them.

Eventually Stepan found out and made her life miserable. He was rude and very jealous, and had been afraid of losing his twenty years younger and beautiful wife whom everyone adored. They started moving all over the country. They settled in Kniazhevo and Slava started working at the Textile Factory in Sofia, but was often ill and underwent seven operations. She suffered from water pleurisy, her liver was difficult to recover, and peritonitis left her childless.

Then they managed to build a small house in the area of today’s Ovcha Kupel neighborhood. Slava kept it perfectly clean, knitted, embroidered, wrote poetry and housed three cats and a land turtle in an attempt to fill the void in her home.

Until one day Stepan came home with a little three-year-old girl named Ivanka. He begged a poor widower with four young and hungry children to give him one of the children. Slava overflew with happiness, did not blink all night and did sew clothes for the poor girl.

Over the years, the problems with her husband intensified – constantly drunk, cursing, demanding, obsessed with cruel jealousy. Often asked by friends to divorce and end her suffering, she replied:

“I am currently clearing a karmic burden with my husband. The reason is in my last reincarnation in Petersburg… I see my previous existence as a Russian noblewoman. I lived in St. Petersburg in the 18th-19th centuries. I have three children. I don’t give them the love they need. They are looked after by governesses.

In that incarnation, I once again carry a divine gift – to penetrate people’s destinies, to predict the future. I am famous and sought after in palace circles. I dress sophisticatedly in the latest fashion. I speak French fluently.

A rich St. Petersburg home. Proud nobles with gilded carriages stop respectfully in front of it. In the entanglements of life, aristocrats from noble families wish to know their upcoming fate. My predictions are accurate.

I am not without flaws in that life. Without care for the children, in the unburdening existence of a Russian countess, I allow myself to flaunt my clairvoyant qualities.

In the last moments of the already flying life, I look into my weaknesses. I sincerely repent for them…”

In her life as a young noblewoman, her young coachman was madly in love with her, and he could not always control his feelings and often showered her with outpourings of love. Realizing the impossible love, he begged her at least to kiss the tips of her slippers. Given the insurmountable differences of class, the proud countess rudely laughed at this love, and when she wanted to reason her insolent coachman, she publicly waved a whip over his head. The neglect of the mistress of his heart,  drowned the handsome coachman in alcohol… But he always forgave her. He continued to love her and… to drink.

“The soul of Stepan Sevryukov was once embodied in this young man. Spontaneous, wild, unrestrained, as now, with an irresistible weakness for alcohol…”

This life, as Slava Sevryukova, was completely different. In the afterlife, she asked for severe trials to atone for her karma from the previous one and to get a boost in her spiritual development. As the bearer of a great divine gift, in her previous incarnation she was rich, haughty, obsessed with her own glory, not humble enough, not loving enough. In this life of Slava Sevryukova, she was born into a poor family, modest, humble and loving, but according to the laws of clearing karma, she was not blessed with children, because she was not a good mother in her previous life.

Despite Slava’s excessively jealous and intemperate husband, she did not leave him and lovingly cared for him until his death. Thus she redeemed her haughty attitude towards the loving coachman in her past reincarnation, who was reborn in her current husband – Stepan. The haughty St. Petersburg Countess became a wife-servant…

“You may be forgiven, but I am not. It is given to me to perceive invisible to men driving forces in life’s turns. That’s why I will mobilize. I will handle it. To break the last karmic connection with this soul. May this never happen again, never again…”

Slava persevered and stayed by her husband’s side until the end. She cared for him around the clock and did her best to ease his suffering on his hospital bed before he passed away. In a brief moment of delirium, Stepan chased her away and… breathed out…

“At the end of my life, I received an insight from my Spiritual Master: My child, you have patiently cleared the burden that tormented you. You will never again meet this spirit in the flesh. This existence has purified and enriched you.”

Clairvoyant activities were dangerous throughout Slava’s life – before September 9th from the church, and after the 9th – from the authorities. The church was merciless towards the prophets, even excommunicating and anathematizing Master Petar Danov (Beinsa Duno). Slava was in constant danger. The changes in the 44th year brought new dangers to the clairvoyant – broken by widespread disbelief, she temporarily lost her abilities. After a period of humility and titanic efforts, Slava regained her Divine abilities with even greater power.

Times were changing, word of Slava, the woman with psychotronic vision, was growing. People came from all over the world. She didn’t ask for money from anyone. Despite her husband’s bullying of her, she spoke with understanding and tenderness about him.

“If we refuse to accept evil, with a sober assessment of its necessity, we will also close ourselves off to good. There are no random people, no troubles, no weights. What happens to us is deserved from somewhere, sometime. Not from anyone else, from us.”

Different days were coming again – a prelude is being prepared over the first one in the country – Todor Zhivkov. The coup was successful. Slava’s home was expropriated – she was being moved to an apartment. Democracy changed scientific and cultural paradigms – more and more intellectuals visited Slava. Historians seeked confirmation of their concepts; screenwriters consulted on details of different eras; interviews were taken and documentaries were made about her.

In February 1962, at the age of 60, she met the physicist Ivo Lozenski, then a 28-year-old assistant at the Mining and Geological Institute in Sofia. He was amazed by her abilities to scan and see in three dimensions the invisible to the human eye; to move freely into past, present, future; to contact the dead. He remained by her side all her life, and Slava accepted him as a son.

“I can work with any engineer and scientist, but I chose Ivo. He is absolutely honest in the responsible research work. I work with Ivo with enthusiasm and desire. A sincere, patient and enduring person is required in my research pursuits. I trust him and give him everything that I see psychotronically. To accept it with all his soul.”

“I’ve been testing him out for over twenty-five years. He didn’t cheat on me. He could have been seduced by quick and easy successes. Did not do it. He Lasted! Masculine scientists achieve results. He stayed and his patience will be appreciated.”

In her advanced age, Slava was not alone. In addition to Ivo Lozenski, attracted by her interest in spirituality, other selected people of different ages and professions gathered around her: Lushka Zlatareva, Krasimira Shopova, Lili Drazheva, Maria Kertikova, Maria (Michona), Elena Vladova and others. Followers and students, but Sevryukova did not express herself as a “guru” – she only imparted knowledge and helps. She called her group “Leha (in Bulgarian – garden box to grow plants)”, in which she threw the seeds of the future.

The last years of her life took place in an apartment in the capital’s Ovcha Kupel 2 district. She lived with Ivo Lozenski, who took care of her, did housework, and went shopping. Her niece often visited them and helped in the household. The flow of those in need of her did not stop. She did not return anyone, but received them always sitting down – at that time, Slava had almost paralyzed knees and moved with canes.

In 1990, she was invited to the First Psychotronics Congress at the Palace of Culture in Sofia. She arrived alone, moving painfully slowly, with two canes. The doyen of the Bulgarian phenomena was greeted with a standing ovation and thunderous applause.

This turned out to be one of the last things he did – soon after, in her home, Slava Sevryukova left our world. The day is April 10, 1991 – the third day of Easter.