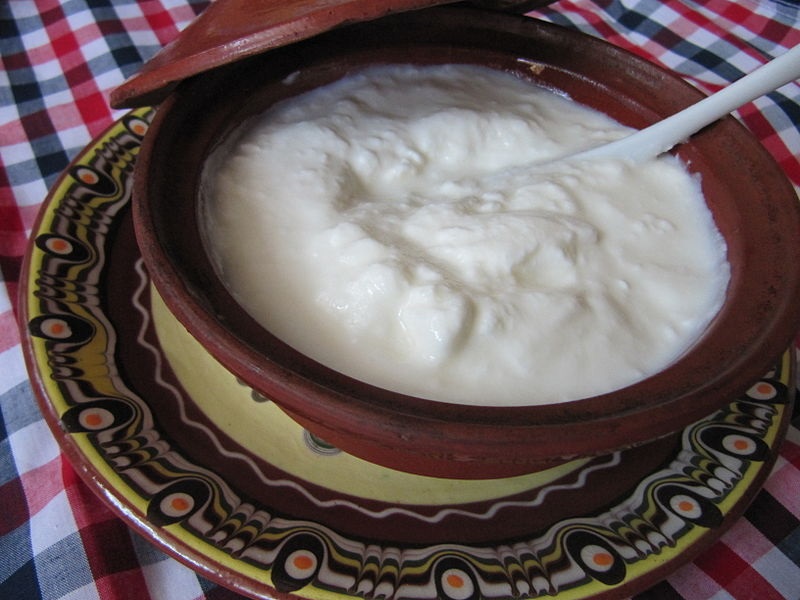 The Bulgarian yogurt is a unique world famous sour milk product. From ancient times it has been considered a food, maintaining people’s health and longevity. In Great Britain Reuters published in the Prying News Column, Oddly Enough, an article with the headline “Do you want to live for 100 years? Eat Bulgarian yogurt!” (Reuters.co.uk):

“In a report from the village of Momchilovtzi, the author Anna Madeva wrote that ’though Lactobacillus bulgaricus sounds like a terribly contagious disease but what this bacterium makes with milk is the reason for the Bulgarian woman Maria Shopova to celebrate her 100-year birthday. Maybe the centenarian does not know that she owes her long life to this friendly bacterium. This Balkan country, Bulgaria, is proud to have invented  yogurt and to have given the world the secret of longevity. “It is a gift from God”, explained the old woman whose food was mainly milk products, especially yogurt. She has spent most of her life in this picturesque mountain village.’

‘In the 1980s the annual consumption of milk in Bulgaria was 40 kg per person. In 2001 it was only 22 kg per person. Representatives of the Bulgarian milk industry, sited by Routers, claim that this decrease is due to the decline of agricultural production. The number of centenarians in Bulgaria has also been reduced to 187, less than one person per 1,000 people in 2001, in 8m people population in Bulgaria, according to the statistics. A hundred years ago there were 4 centenarians per 1,000 people.’

‘Now you can buy  yogurt in the supermarkets all over the world. It was in the beginning of the 20th century that the Russian scientist Ilia Ilich Mechnikov made connection between  yogurt and the longevity of people in Bulgaria; according to him that was due to the most traditional food, home-made sour milk…’

‘Later numerous studies in Europe, Japan and the USA, proved that Lactobacillus bulgaricus in  yogurt helps maintain good health by protecting the human body from toxins, infections, allergies and some varieties of cancer. Historians think that  yogurt was part of the food diet of the ancient inhabitants of Bulgaria, the Thracians who were very good sheep breeders. In their language “yog” meant “thick”, and “urt“ – “milk”, so the word “yogurt”  has come from there’.

‘World producers of food like the French DANONE, the Swiss Nestle and the Japanese Meiji Milk Products also use the good bacterium. Consumption of  yogurt in Bulgaria has decreased but Bulgaria will not give up its pretence to be the discoverer of yogurt. Experts from the Bulgarian Ministry of Economics declared before Reuters in Sofia that they demanded the World Trade Organization (WTO) not to permit other countries to call their  yogurt  “Bulgarian” or “in Bulgarian style’”.

Food by recipe: the lie about yogurt

Consumers should pay a serious attention to milk food and drinks offered as they are connected with the concept “healthy” or “wellness”.

In the first place, these are various kind of fruit milk. Since 2006 French consumers can be reimbursed if they present a check for the purchase of sour milk drinks reducing cholesterol from the DANONE Company.  The DANONE Company signed a partnership contract with the Allianz Insurance Company. It concerns the new sour milk drink Danacol which is with added phitostanol and phitosterin. The same success as with the probiotic soul milk drink Actimel is expected. Agencies for Consumer Protection consider such transaction as scandalous and oriented to maximum profit. There are no clinical tests like for medicines for such food products. Consumers do not know what the content of the drinks is. It is still not clear what the effect of probiotics is and what part in this effect the body takes. Look at the advertisements: “Actimel activates your resilience”; “Actimel – daily contribution to your health”. Most of the research is in vitro, in a test tube or with animals but they cannot replace clinical tests with people. Science has not given an answer yet to the question how many bacteria you should take a day and whether the lasting change of intestinal flora is really safe. One or two  yogurt pails of 250 g contain enough lactic acid bacteria and you can very easily stop buying expensive probiotic products,

We must note that  yogurt is an essential product and an effective biological means to improve the health of the people only when its production and quality meet the requirements of modern standards and are under strict hygiene, microbiological and technological control. At present we hear people who do not recommend eating milk. Milk cannot be harmful according to scientific research. There are people who are sensitive to milk; they lack the lactase enzyme which degrades milk.  When they eat milk, they swell and have gas. For such people it is good to take milk products because in the milk products milk sugar is turned into lactic acid.

The question of  yogurt quality is another problem. In spite of the fact that all Bulgaria milk is controlled, there is a laboratory control and milk is tracked, it is a fact that the famous Lactobacillus bulgaricus is the least ingredient in the yeast. There are twelve other strains, like Bifidus essensis. For example, the French milk dessert of DANONE has nothing in common with Bulgarian milk.

There is no scientific evidence that  yogurt is harmful. On the contrary, it is useful. We speak of probiotics. They are living cells, various kinds of strains, lactic and others, which improve the micro flora of the gastrointestinal tract, full of any kind of flora.  yogurt has anticancer, hypo cholesterol and even lipidemic effect on the human body; it digests fat, reduces the weight and has a number of other favorable impacts.  yogurt is the food of the Bulgarians, and even though many producers try to fake it, it is a necessary and essential food. A hundred years ago the Bulgarians were the longest living nation. In one million people there were 1,600 centenarians.

What are the problems of the Bulgarians’ diet besides the diminished quantity of yogurt?

Let us see which foods you can find on the Bulgarian table during the transitional period after 1989 up till now.

Bulgarians eat enough bread but they prefer white bread. Bulgarians eat fruit and vegetables but the consumption level before the changes in Bulgaria in 1989 was much higher. In 1989 Bulgaria left the Soviet block and a transition period from socialism to capitalism began but it has not finished yet.

The recommended quantity per day for fruit and for vegetables is 300 g but Bulgarians eat only half of that quantity because the prices are too high. The Bulgarian national cuisine is delicious but Bulgarian dishes require equal components of meat and vegetables; now the vegetable part is lower. Instead of lean meat Bulgarians eat meat with fat and bones and sub-products.

Bulgarians have never eaten enough fish. They consume three times less fish than recommended per day. We all know that fish is the best cure for cardiovascular disease prophylaxis and for improving liver parenchyma.

Bulgarians eat enough eggs as they are the cheapest protein. The egg is a naturally balanced food with vitamins, minerals, proteins and fats. There is cholesterol in the yolk but there are cholesterol factors which take it out of the gastrointestinal tract; these are the phospholipids. Phospholipids are the best natural regulator of cholesterol levels. Therefore, eggs are very good food as they have very valuable amino acids in the yolk and contain sulfur, methionine and choline. Not more than two yolks per week should be consumed. The egg white is very good, too.

The well-known Bulgarian scientist, Professor Hristo Mermerski, launched a new theory called Antiaging; it includes healing and anticancer foods. In his opinion, 70% of the world population dies as a result of irrational, irregular and criminal attitude to nutrition.

In order to preserve their health and youthful vitality to old age, people should use foods which protect them from such dangerous diseases like gout, diabetes, ulcer, cardiac attack, various kinds of cancer, brain attack, atherosclerosis and others. The professor recommends the following very pleasant recipe to use at least two or three times per week: in a pail of Bulgarian  yogurt put 1 table spoonful of pure mountain honey, 30-40 g of ground walnuts, 1table spoonful of apple pectin, 1 tea spoonful of cinnamon and 40 drops of propolis tincture. The healing effect of these products is very big as the Bulgarian  yogurt is the most easily digestible food; it contains the eight essential amino acids and the two healing lactic bacteria. Honey contains 22 out of 24 vitally important microelements, vitamins and others. Walnut is a unique cure to improve the brain activity and memory. Pectin is the “sweep’ which cleans the body of heavy metals and toxins. Cinnamon lowers the blood sugar. Propolis has antivirus, ant flu and antimicrobial effect. All these products, taken together as one nutritional product, have anticancer effect and improve your health.

Today, a hundred years after professor Mechnikov’s hypothesis, we witness the scientific discovery of the essential qualities of the Bulgarian  yogurt which causes revolutionary changes in the opinion about this product.