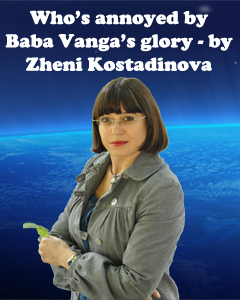 – How the words of the Bulgarian Nostradamus start to live on their own? The prophetess had never said that Rome will become a capital of the halifat.

Baba Vanga had never predicted a beginning of a third world war, nor she mentioned anything about Rome becoming the capital of the halifat.

In Bulgaria the interest about the personality and the predictions of Baba Vanga had never stopped. She is very popular in Serbia, Macedonia, and in Russia – two years ago, they made a movie about her. But suddenly, in the beginning of December, 2015 the deceased prophetess became a world news after one of the biggest tabloids – New York Post have published a material about her titled “We had to listen to this blind Bulgarian prophet about Isis”. Part of the article says: “Blind mystic who had predicted the 9/11 terrorist attacks, the tsunami on 26th of December 2004, the failure of the Fukushima nuclear plant, and the birth of Isis, had also made ominous predictions for 2016 and henceforth.” Same story is published by other big tabloids such as the Independent and Mirror who are based out in the UK.

Baba Vanga had never predicted by consecutive years. Those “predictions” of hers that start from the year 2000 and continue all the way up to year 5000 had initially started from the website of Ria Novosti about 6-7 years ago. Recently a Turkish blog had changed and made up new predictions, and in the era of internet everybody shares and popularizes complete nonsense that lack any documentation or evidences. I advise people to be very careful when reading such “news”. Baba Vanga is easily used as an instrument to persuade people in all sorts of messages, but the ones that seek the truth are usually very mistrustful.

The common predictions attributed to Baba Vanga that have been circulating around the web and even cited by world-known tabloids are written by years. Here are some examples of what have been published:

2023 – Earth’s orbit will change (whatever this means)

2033 – Water levels will rise due to the ice meltdown

2076 – Communism will return to Europe

Commonly the last prediction that has been published is for 3797 – this is when there won’t be life on Earth.

It is really very sad that there are so many publications that are citing Baba Vanga’s predictions incorrectly. Everybody is making up his own bizarre predictions, or they would mix her real words with their fictitious stories, and all this is only distorting in a very negative way the real image of our prophetess, as well her phenomenal gifts and wisdom. But this is not uncommon for the great people – their myths are usually outliving the person itself and what he had left on this world.

For over 20 years of research on the live and deeds of Baba Vanga I have never met a single person to tell about any of the above predictions. Where they have taken those from? What are their sources? Always when I speak about a prediction given by Baba Vanga I cite the person that she said it to, and when it was said. Baba Vanga was extremely careful to whom she would share any of her predictions as she knew very well that a lot of people will abuse with it. There were such people spreading misleading information on behalf of the prophetess even when she was alive. Today unfortunately, when Baba Vanga is no longer present in the physical world, she cannot defend herself from absurd statements, that aim to spread fear among people. This is why Baba Vanga refuses to make a lot of global predictions. When she had done that, she had insisted on people to keep it a secret. There are some things that were meant to be kept hidden.

– What about the popular prediction that Baba Vanga had said that the world conflict will start because of a virus that was accidentally spread out of a lab?

This is an absolute nonsense! Another populist story written to get more attention on the back of Baba Vanga. Today some people had even wrote novels on Baba Vanga where they have cited their own fabrications on behalf of the prophetess. This is a pure form of blasphemy. But everybody pays for his own actions and is responsible for what he has done.

– Baba Vanga had seen Bulgaria, Turkey, and Greece together?

Yes, one of her oldest predictions but one that still has not come to reality is the union of the Balkan nations. She had said this in 1948: “One day, the Balkans will unite. Sofia, Bucharest, Beograd, Athens, and Ankara will start negotiations and will give each other a hand.” In a conversation with Yanka Takeva, Baba Vanga hints that she does not see a great danger on the Balkans, but if the subject about Great Albania is opened, this will be alarming. So how we can interpret her words? About the Balkan union, it is not impossible for the EU to break apart, and the Balkan nations to start looking for ways to cooperate with each other. Regarding the Great Albania subject – let’s hope to not have such a scenario (which is not excluded), also taking into consideration our turbulent times we live in.

– Baba Vanga had predicted suffering for Serbians as “they swear at God”, but Bulgarians also swear. How long we have to suffer for that?

It is not exactly like that. She had said: “Yugoslavia will become in pieces, because Serbians swear at God.” Indeed there is one very insulting swear in the Serbian language that involves God…Bulgarians don’t have such a swear. Most probably words have very powerful meaning, and Baba Vanga suggests that once those words vibrate in the everyday speech, they create a meaning, for which you pay a price. Words are some kind of magic…For us Bulgarians, she had said that we will suffer as we are infidels. Neshka Robeva and PhD. Dimitar Philipov are witnesses to this statement. Baba Vanga was a strong supporter of the idea that schools have to have classes on religion to teach children on good values and virtues. She didn’t separate religions – on the contrary she respects each one of them because for her God is one and only, nevertheless that Baba Vanga was an orthodox Christian. Infront of Yanka Takeva Baba Vanga had said that the politician who includes religion classes in schools, will be ruling for a long time. If her words were cited correctly, our present politicians can start thinking about them.

Zheni Kostadinova graduated Philosophy at the Sofia University “St. Kliment Ohridski”. She has worked as an editor at the student TV show “Ku-Ku”, and as a reporter at the National Radio “Horizon”. For over 15 years she is a columnist at “Weekly Trud” newspaper writing about esoteric and psychology. In the same newspaper she is maintaining a page on literature. Zheni Kostadinova is the author of some of the most popular books written on Baba Vanga including “Baba Vanga The Prophetess”, “Baba Vanga Predictions”, “The Secret of Baba Vanga”. Her first book was translated into Russian, Polish, Latvian, Serbian, and Albanian. Zheni is a member of the Union of Bulgarian Writers. She had published three books of poetry: “Fire Sticks (2002), “17 love colors” (2007), and “Fig Jam” (2008). In 2012 Zheni has founded the art-house “Kuklite”. It is a doll gallery and a mini-museum located in downtown Sofia.  The gallery exhibits different dolls placed in specific categories. Besides the exhibitions, the art-house “Kuklite” also have the priority to work with children from the local schools, so they learn more about the traditions and customs of the different nations. The main idea is to transform the art-house “Kuklite” into a centre for cultural exchange, creative collaboration between representatives of different fields of art, science and philosophy. The art-house will hold meetings with interesting personalities, and will be a place of exhibitions, seminars, workshops, premieres of books and documentary movies, puppetry, and many other great events. The art-house “Kuklite” will also be a place where collectors can display their favourite artefacts and can share the history associated with them.